See if this sounds familiar. The IT department needs to know where to find data and voice jacks throughout the building, as well as track where computers, printers, and other technology assets are physically deployed. Human resources needs to keep track of the buildings, floors, and office space to which personnel have been assigned. The security department needs to understand the security systems in place, the entrances and exits, and to whom access has been granted for each of these points of ingress and egress.

To compound the problem, each of these departments has created its own space inventory system and is proprietary with such information. With so much information being circulated and requested, it is amazing that everything comes together during office footprint changes.

Numerous inventory systems being maintained for physical space and the human and technical assets that occupy that space are not the crux of the problem; it’s the tremendous amount of redundant time and money being spent maintaining what should be the same core information. Namely, who and what occupies the space.

The dynamic nature of space information, and maintaining the accuracy of it, is generally a heady challenge for the facility professional. Fortunately, physical space doesn’t change often, but in service companies with large inventories of office or administrative properties, tracking and maintaining footprints can take a substantial amount of time.

If there is a high rate of churn, occupancy information is constantly changing and has an unfortunate habit of being left unreported. Because churn isn’t likely to decrease in these type environments, keeping track of space is a big problem.

This issue is becoming more prevalent with expectations that facility managers keep records of detailed space tracking, non-employee (consultant) use of space, and churn.

Accuracy in tracking space planning initiatives and existing footprints remains problematic. The accuracy issue has two major concerns. The first is the likelihood of non-comparability of space inventory between numerous systems throughout the company. The visibility of space is usually spread throughout multiple functions and departments.

However, gathering footprint data from different departments and encompassing it into an asset management system can create a proficient single point of entry for information to be submitted and retrieved.

The second (and probably greater concern) is a lack of full communication between different parties. Another benefit of a solitary asset management system is that more company personnel can be given access to footprint set-ups and planning.

By encompassing this type of enterprise mentality, personnel is made aware of changes or moves. This can help alleviate any miscommunications or unforeseen problems.

Although facility professionals are typically in a position to be aware of footprint changes, there are situations where other departments may be privy to information that the facilities department is not. If a new person is hired, for example, the human resources department will be involved through the job interview and paperwork processes associated with the hiring. The IT staff might be involved because they are responsible for putting a phone and computer in place for the new employee. Upper management might decide to use an existing cubicle for the employee, and thus the facility manager is not included in the space change.

Whether a hire or move are planned with their help, facility professionals should have access to changing footprint needs. By working together on a company wide asset management system, the enterprise can gain a much more accurate and consolidated view of space information.

With space information throughout numerous company departments in a single asset management system, facility managers have an opportunity to save real money by consolidating efforts. Several technical solutions exist in the market that collect different views of space information and format it into a central inventory that creates an enterprise mentality.

As the move toward standardization of inventory and office space occurs, new capabilities are realized. One of these is space self-help. This concept would work in a way that is similar to someone seating themselves for airline flight. The end users are able to see the available seat map for an airplane then select and reserve their seats. In much the same way, space planners would be able to see the inventory of vacant and available space according to time sensitivity and then make reservations for that space. These reservations could trigger work orders to other departments that cause personnel to move boxes and the aforementioned phones and computers to be installed and configured. As an added bonus, this could be extended to other employees who might not be involved in such activities. For example, people who work in an office area that is expecting a footprint change would be informed via e-mail.

Although the enterprise view of space management is not yet widespread, there is increasing awareness in companies that by taking an enterprise perspective, they can realize greater accuracy and reduced cost and effort. 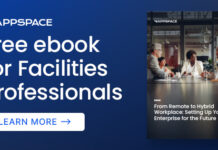