Mike McClellan is facility/construction manager for a popular Santa Cruz, CA restaurant called The Crow’s Nest. One of his primary goals is to conserve water–no easy task in an industry where water is often taken for granted. But in his city, “water is gold,” and McClellan is working diligently to yield valuable results.

Why have you explored conservation practices in your facility?
We became interested in environmental issues, because we wanted to show some leadership. In the past, it wasn’t cost effective. You just paid your bill, and you went on with life. Now it’s more practical to save, because resources are so expensive.

We try to take a varied, realistic approach. For instance, in our fluorescent program, light bulbs go from 75 watts to 15 watts per bulb. Another energy saving measure we’ve adopted is the XLERATOR® touchless hand dryers from East Longmeadow, MA-based Excel Dryer Inc. These are new initiatives for us.

Why was the decision made to focus on water conservation?
The state of California is a very environmentally conscious part of the country, and Santa Cruz is particularly green in its leanings. For us it was a survival strategy, plain and simple. Years ago we had a drought, and we knew the consequences of what that could bring.

Water is just like gold around here, and in the restaurant business, you can run up quite a bill. We knew it would be crazy to hide our heads in the sand, so we decided to be proactive. We hoped we’d be at the front of the line to receive a reasonable allocation of water when we needed it if we showed a year-round commitment to conservation.

Before our dishes go into the dishwasher, everything is cleaned off in a scullery. Standard for the industry is a squeeze handle spray washer that uses approximately three gallons per minute. T&S Brass and Bronze Works, Inc. of Travelers Rest, SC makes a spray nozzle that uses half that amount, which, in turn, saves us over $2,000 per year.

Another decision that worked out equally well was the move to go with the urinals from Falcon Waterfree Technologies of Grand Rapids, MI. We saw the product at a trade show, and we immediately thought it was a good deal. While the main purpose of this device is saving water, we knew we’d be in for saving big money as well if the product delivered anything close to what it promised. When we got down to how much we were really saving, it translated into about $800 a year per fixture.

What are the challenges you face in other conservation strategies?
We use a roofing product that’s not harmful to the environment. It has no petroleum products or anything like that, and it’s not carcinogenic in any form. I like it because it doesn’t smell, it’s easy to use, and it’s water soluble. Best of all, it’s extremely durable once it dries.

Frankly, I am torn when it comes to purchasing green products. Sometimes I think supporting the local merchants is better than trying to find some product that will have to be transported in from a great distance–or even shipped from another part of the world. I tend to buy American when I can. Sure it’s a personal thing, but I also like to be able to talk to an engineer about a piece of equipment or get a hold of the manufacturers or engineers fairly easily. I’m not perfectly green out here, but I’m doing as much as I can.

What kind of resources have you tapped into to find out about new products?
Energy Star is one nationwide program that can help. However, I don’t think there are enough resources for those of us looking to make bold purchasing decisions.

Unfortunately, it’s a very disjointed situation. Facility professionals have to pick up information wherever they can. The trade magazines, the Internet, and word of mouth are all good resources.

We need a place to ask questions and filter out the valuable information from the junk. It would be wonderful to have a clearinghouse for environmentally sensitive products. Sooner or later, it will have to be that way, or no one will take the chance on new technologies.

I understand the reluctance to endorse something, and different states march to different drummers. But this leads to mediocre results rather than a proactive approach.

What was the most professionally rewarding aspect of this project?
It works, and that’s pretty exciting. To go out and save 40,000, 50,000, or 60,000 gallons of water somewhere else in the restaurant (such as, not offering customers water at the table) would be a major inconvenience. And many of these measures wouldn’t even come close in terms of savings.

How else would we save that much? It would be pretty hard–if not impossible–without directly cutting into the services we’re here to provide.

Sure we were skeptical, and rightfully so. But it’s a credit to these manufacturers when they can come up with legitimate solutions. As proactive facility professionals, we have to embrace these legitimate technologies when they come along.

The state of California is operating on an overdraft for water usage. It’s clear that things will get worse before they get better. So when it comes to water conservation in Santa Cruz, we can’t afford to miss the boat! 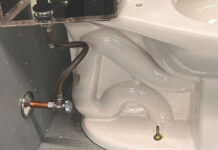