Published in the July 2005 issue of Today’s Facility Manager

The potential of wind energy is a popular topic of discussion among those interested in energy consumption. This renewable energy source is touted by proponents for its endless supply and environmental friendliness. During 2004, wind farms in 30 states across the U.S. provided 6,740 megawatts (MW) of energy capacity—the equivalent of enough power for 1.6 million homes. (One MW of wind capacity generates enough electricity for the average use in between 250 to 300 homes.)

Research recently published in the Journal of Geophysical Research, Atmospheres, submitted by Stanford University researchers Mark Jacobson and Cristina Archer, has produced a global wind power map quantifying wind power. The study, supported by Stanford University Global Climate and Energy Project and NASA, includes analysis of more than 8,000 wind speed measurements from the National Climatic Data Center and the Forecast Systems Laboratory for 1998-2002. This data was used to generate maps and statistics for global wind power in 2000.

Jacobson, associate professor of civil and environmental engineering at Stanford, and Archer, a former post-doctoral fellow there, worked on this study together and reported that nearly 13% of the stations reviewed experience winds with an average annual speed strong enough for power generation. These Class 3 winds are those with speeds of 15 miles per hour at a height of 300′ (the hub height of modern wind turbines).

Such conditions were identified worldwide, with the greatest potential in North America. The most consistent winds on the continent were in the U.S. Great Lakes region and along the coasts. The researchers suggest that wind, even partially harnessed, has the potential to generate enough power—72 terawatts per year—to satisfy world energy demands. “The main implication of this study,” says Archer, “is that wind, for low cost energy, is more widely available than previously recognized.”

While the Great Lakes and coastal locations were identified as prime sources for wind in the U.S., a 2004 ranking from the American Wind Energy Association (AWEA) of the top five states for wind installations includes only two states in those regions. California led with a total of 2,096 MW installed at the end of 2004 and Minnesota was fourth (615 MW). Other leading states were Texas (1,293 MW), Iowa (632 MW), and Wyoming (285 MW). If compared to the Jacobson and Archer study, it is apparent wind power use has not reached its geographic potential.

Earlier this year, the AWEA reported that the installed capacity for wind power in 2005 could increase by as much as 35% over that in 2004. This expectation is fueled, in part, by investments from firms such as AES, GE, and Siemens. Randy Swisher, executive director of the AWEA since 1989 says, “This will be a record year with close to $3 billion of business for new wind project development that we expect to see.”

Swisher notes the U.S. wind market has grown 25% per year over the past five years. “In the late 1990s, a market for wind became evident as it became competitive with conventional fossil fired electricity in some regions—places like Texas, Minnesota, and Iowa where there are good winds,” he says. “That got the interest of utilities.” Swisher also notes that one of the most important growth factors is that the cost of wind power has declined by more than 80% over the last 20 years.

Another growth factor is the nearly 20 states with a renewable energy requirement. “Some of those are relatively new,” says Swisher. “But some have been in place for a few years, and we’ve started to see state requirements in Texas, Minnesota, and Iowa really beginning to make an impact.”

For all the environmental benefits and investment, there are challenges. “Wind has certain challenges including the need for infrastructure,” Swisher explains. “It will be difficult to harness the potential in many places until there is transmission access.” Infrastructure includes lines to channel the energy and a substation that steps up the power for distribution.

Another challenge concerns federal legislation. The Production Tax Credit (PTC), passed in 1992 and effective in 1994, provides a 1.8¢ per kilowatt hour (KWh) credit for electricity from a wind farm during the first 10 years of operation (adjusted for inflation). However, the PTC has been allowed to expire three times in the past six years. “The biggest constraint to the growth of the industry has been the episodic nature of the PTC,” says Swisher. “There is now a three year extension, approved by the Senate Finance Committee, that would last through 2008. It looks like it will be included in the energy bill being debated in the Senate. It would be a huge green light for investment.”

There is also the question of reliability. What if the wind stops blowing? “Throughout the day, utilities are trying to manage demand to meet the needs of customers,” says Swisher. “They’re cycling power plants on and off as the demand on the system increases and diminishes. The wind farm operator increasingly is in a position to let the utility know how much electricity he or she is going to be providing. Wind is a little different because of its variability, but for those utilities that have learned how to operate a wind farm and manage that variability, it’s not that difficult.”

For facility managers interested in wind power, there are options. “Some manufacturers have wind turbines at their plant sites that provide energy for their operations,” Swisher explains. “Schaefer Systems in Adair, IA, for example, uses wind power to supplement its power needs.” Schaefer owns wind power turbines that were installed at its site in 1995.

Another possibility is to purchase green power from a utility. George Milner, senior vice president of energy and environmental affairs at Mohawk Paper, led the move to use wind power at the company’s manufacturing plant in Cohoes, NY. Mohawk purchases renewable energy credits from Community Energy, Inc. Implemented in August 2003, Wind power currently provides 38% (45 million KWh) of Mohawk’s annual consumption, according to Milner.

Energy consumption is an issue concerning virtually all facility managers these days. Wind energy is one renewable, alternative source that can help ease the burden on traditional supplies.

Information for this article was obtained, in part, through interviews with Milner and Swisher, as well as the “The Evaluation of Global Wind Power” report by Jacobson and Archer. 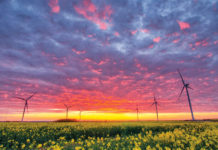