Home » All about Hurricane Katrina 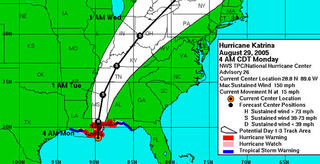 This storm, which has dominated news coverage throughout the weekend, is just beginning to make its mark on the states around the Gulf of Mexico. On a national–and possibly international–scale, the storm has pushed gas prices up over $70 a barrel, and the stock market is responding. As oil prices go up, the stock market goes down–at least today.

As Katrina plowed through the Gulf of Mexico, oil companies shut down production from many of the offshore platforms that provide a quarter of U.S. oil and gas production. At least 42% of daily Gulf oil production, 20% of daily Gulf natural gas output and 8.5% of national refining capacity was shut on Sunday, producers and refiners said.

U.S. oil futures jumped nearly $5 a barrel in opening trade to touch a peak of $70.80. The rise in oil prices fed through to other financial markets, hurting stocks and the dollar on fears that economic growth might be curtailed but boosting safe havens such as government bonds and gold.

In regional terms, it’s clear this storm will create a path of destruction (at worst) and inconvenience (at best) as it makes its way through the middle of the country. Already, airports are starting to experience delays, and it will only get worse as the storm moves along.

Obviously, airports in the greater New Orleans area are closed, and most of the people (nearly one million, by some reports) who live in the vicinity have evacuated to higher grounds. For those stuck in New Orleans–either without a hotel room or without access to friends or family in safer settings–the Superdome has become a sort of makeshift sanctuary. How safe it will remain is still up in the air, but for now, the most significant challenges are power outages (no air conditioning, in other words) and holes in the roof.

The development, around 8 a.m. as the storm neared its peak outside, did not create any visible fear among the estimated 8,000 to 9,000 people who spent the night in the huge arena. Some watched as sheets of metal, flapping visibly, rumbled loudly. From the floor, looking up more than 19 stories, it appeared to be openings of about six feet long.

General Manager Glenn Menard said he did not know how serious the problem was. “We have no way of getting anyone up there to look,” he said.

Superdome and government emergency officials stressed that they did not expect the huge roof to fail because of the relatively small breaches, each about 15 to 20 feet long and 4 to 5 feet wide. The holes were in an area of vents some 19 stories above the arena floor.

“We think the wind somehow got into the vents and got between the roof’s (waterproof) membrane and the aluminum ceiling tiles,” said Doug Thornton, regional manager of the company that manages the huge arena.

Menard said that although only the two holes were visible from the interior, more damage was possible. “We can’t tell how much of the roof..is damaged, and we won’t be able to tell until we get the engineers up there after the storm,” he said.

Once again, for more information on how to prepare your buildings for a hurricane, see TFM‘s feature, “Surviving A Rough Hurricane Season,” by Bill Begal. For the thousands of temporary residents of the New Orleans Superdome, this will be a very long day…or week…or whenever…

Note this addendum from Architecture for Humanity:
When a disaster strikes in our own backyard we feel compelled to assist where possible. A state of emergency has been declared in four states in the wake of Monday’s class IV hurricane: Louisiana, Mississippi, Alabama and parts of Florida. According to FEMA , as of early August 29, approximately 52,000 people were in 240 shelters throughout the Gulf Coast area, with the majority in the New Orleans Superdome. In Mississippi streets and homes were flooded as far as six miles inland.

While it is too early to determine the full extent of the damage caused by the storm, Architecture for Humanity is appealing for donations to support the work of local architects in the reconstruction and repair of the region’s hardest hit areas.

(This is not an endorsement or solicitation from TFM, FacilityBlog, or the editors; it is merely a source for those who wish to find out more about making facility/architecture related donations.)