Home » Base closings, round two 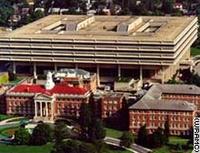 Yesterday, FacilityBlog mentioned the closure of several military bases around the country; today, more announcements have already been made—the most notable being the closure of Walter Reed Hospital in Washington. The hospital has been treating military personnel along with top executives from around the world for nearly 100 years, but its facilities are in serious need of an overhaul, making it more expensive to improve the hospital than it would be to shift staff to newly constructed digs–also called Walter Reed Hospital–on the grounds of the National Naval Medical Center in nearby Bethesda, MD.

Liz Sodotti of the Associated Press reports, “‘Kids coming back from Iraq and Afghanistan, all of them in harm’s way, deserve to come back to 21st-century medical care,’ Commission Chairman Anthony Principi said Thursday, adding that the hospital is old. ‘It needs to be modernized.’

One-time costs, including construction and renovations, would total $989 million. The Pentagon would save $301 million over 20 years, the commission said. The current hospital has about 185 beds, but the expanded facility would have 340.”