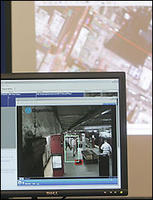 In the aftermath of last month’s bombings in the London Underground, New York City has finally announced an aggressive plan to deal with terrorist acts on public transportation. Commuters have complied with added security checks, but these efforts will now be supported by the latest technological devices as well.

Officials unveiled the high-tech future of transit security in New York City yesterday: an ambitious plan to saturate the subways with 1,000 video cameras and 3,000 motion sensors and to enable cellphone service in 277 underground stations – but not in moving trains – for the first time.

The surveillance and cellphone strategies, together with a police campaign begun last month to check riders’ bags and packages, are a step toward what some critics have long said cannot be done – putting the nation’s largest transit system under constant watch, and fortifying it with enough obstacles to deter potential terrorists.

At the center of the effort will be a dense network of cameras that can zoom, pivot and rotate, all while transmitting and recording images of vulnerable areas, from dark tunnels under the East River to bustling subway platforms in Midtown. Each camera will capture distances up to 300 feet and will cost about $1,200. A selected location could have two to 30 cameras. For now, there will be no cameras on trains and buses.

Fire & Life Safety July 19, 2021
Modern building codes and standards are the foundation of fire adapted communities, helping to reduce risk and increase community resilience from all hazards including wildfire.