Home » Facility management nightmare: the fate of the Louisiana Superdome 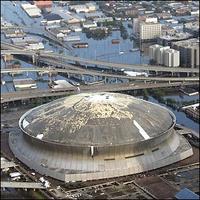 In the aftermath of Hurricane Katrina, some reports say the Superdome will be knocked down.

This message comes from CNN:

The Louisiana Superdome was so heavily damaged during Hurricane Katrina and its aftermath that it likely will have to be torn down, a disaster official working with the governor’s office told CNN.

However, a conflicting message posted on msnbc.com says this claim is unfounded:

The operator of the Louisiana Superdome said Wednesday that talk of tearing down the stadium is “purely conjecture and speculation.” Doug Thornton said the building was damaged during Hurricane Katrina but it’s structurally intact.

The roof leaks, there are problems with electrical and mechanical systems and it’s full of trash and human waste from thousands of people who sought shelter from the hurricane. In addition, Katrina sheared away much of the roof’s covering, and water leaked into the stadium when it was used as a shelter for thousands of stranded residents.

Thornton said it will take at least 45 days to assess the damage.

With electrical problems and some floodwaters still standing in the Superdome, state officials said the future of the building has not been determined. But they did say this: damage to the structure could hit $400 million, and it’s unlikely the facility could be used for at least a year.

Superdome Commission Chairman Tim Coulon said the Dome will hire engineers and other consultants to assess the structural stability of the stadium. That will be done in the next few weeks, Coulon said. “We have to do a damage assessment first,” Coulon said. “It is premature to write the Dome off. But there has been substantial damage.”

Coulon refused to say whether he or state officials prefer to demolish the Dome or try to renovate it. The engineering study and assessment will help determine the course, he said.

Doug Thornton, a regional vice president for SMG, the company that manages the Dome and the nearby New Orleans Arena for the state, said the Dome’s interior was trashed during the evacuation and must be decontaminated before engineers look at the structure. “It may take us two to three weeks to get it cleaned up,” Thornton said. He said it may take another 45 days to determine how sound the structure is.

Thornton said the arena fared better. Water has soaked some of the facility’s carpeting, tiles, and other areas, but he said it is possible the arena, which plays host to the New Orleans Hornets and several concerts each year, could be back in operation “in the first quarter of 2006.”

But, he added, compared to flooded streets and homes, homeless residents and possibly thousands of deaths, the stadium is “a second- or third-tier item.”