Earlier this year, the U.S. EPA gave Interface Flooring Systems the Landfill Methane Outreach Program (LMOP) “Energy Partner of the Year” award. This award was given in recognition of the company’s role in identifying an opportunity for the City of LaGrange, Interface, and other businesses in the South Georgia community to convert methane from a local landfill into renewable energy.

“This project—the first of its kind in our industry and in Georgia—is a true, triple bottom line success,” says David Hobbs, president of Interface Flooring Systems. “By capturing the methane component of the landfill gas (LFG), using it to displace our use of natural gas, and converting the excess to carbon dioxide via a flare, the global warming effects of this landfill are
greatly reduced. Local businesses, including Interface, have access to a renewable fuel source, and the City of LaGrange has realized a new revenue stream through the sale of the LFG. It is a success on every front economically, environmentally, and socially.”

The landfill gas project was initiated in 2001 when Interface approached the City of LaGrange about the possibility of converting yesterday’s waste (the contents of the landfill) to tomorrow’s fuel. Working in partnership with LMOP and the World Resources Institute (WRI), Interface and the City were able to demonstrate the clear environmental, social, and economic benefits.

“We studied the concept with the City of LaGrange for almost two years before the project took its final form in 2003,” explains David Gustashaw, vice president of engineering for Interface Americas. “This was an excellent team effort resulting in a solution that benefits the greater LaGrange community. In October 2005, the LFG system was commissioned and Interface became the first carpet manufacturer in the U.S. to use LFG for process heat at its facility.”

“EPA is proud to recognize Interface for their continued leadership in environmentally sustainable practices. Without Interface, this project would not exist today,” says Chris Voell, program manager, EPA Climate Change Division. “Because of these efforts, the local and global environment will benefit from the use of this valuable alternative energy source, helping reduce greenhouse gas emissions while offsetting the nation’s reliance on fossil fuels.”

The landfill gas project in LaGrange is part of a global effort to find renewable sources of energy to power the company’s operations and to reduce global warming emissions. Interface is an Energy Partner in EPA’s LMOP program and a charter partner in the U.S. EPA Climate Leaders Program, a voluntary partnership challenging businesses to reduce its greenhouse gas emissions. It is also a founding member of the Green Power Market Development Group (GPMDG), a partnership of leading multinational corporations and the World Resources Institute. 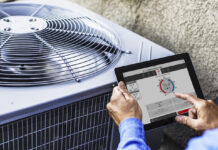