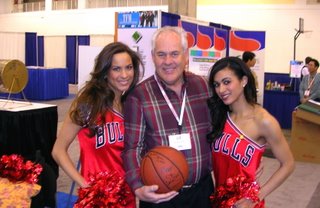 Tuesday, April 11 at The TFM Show was filled with several unbelievable highlights, especially for one extremely lucky attendee, Alan Smith (pictured with two Chicago Bulls cheerleaders). Smith is with the facilities team of 3M in the Salt Lake City area.

Smith unexpectedly won the $50,000 basketball competition against tremendous odds. The challenge required him to sink a series of four basketball shots–layup, foul line, two point, and half court–with no misses and no practice shots. Despite his tremendous skill, he modestly said he was just happy to make the first layup. When it came time for him to try for the half court shot, everyone told him, “Make sure you aim carefully.” His reply was, “I can’t even see the thing!”

Smith has been a great friend to the TFM Show and is a loyal reader of Today’s Facility Manager magazine. While Smith has been long time TFM Show attendee, this year’s event will probably be his most memorable.

When this editor asked him what he was going to do with his winnings, his reply was, “I think I’d like a Sprite.” I suspect our winner was in a slight state of shock. Congratulations, Alan, and I know I’ll see you next year at the TFM Show! It couldn’t happen to a nicer guy!