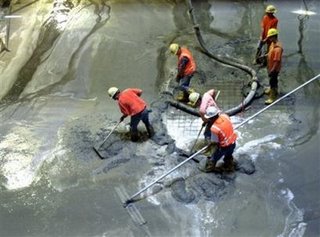 With a project that cost Beantown billions of dollars, millions of wasted commuter hours, and countless delays, it may be no surprise that at least one company, in this case Aggregate Industries, is being brought up on federal charges. Jay Lindsay of the Associated Press has this report:

Six men whose company supplied most of the concrete in the Big Dig were arrested Thursday on federal charges alleging they falsified records to hide the substandard quality of materials delivered for the $14.6 billion, delay- and leak-plagued downtown highway tunnel project.

The six, all current or former employees of Aggregate Industries, face a variety of charges including making false statements, mail fraud and conspiracy to defraud the government between 1996 and August 2005.

The indictment charges the men with recycling concrete that was too old or was already rejected by inspectors, and for double-billing for loads of concrete in some cases. The company was paid $105 million for 135,000 truckloads of concrete, and at least 5,000 of those truckloads did not meet specifications, according to the indictment.

Read the rest of the story here.