While early reports suspect chemicals triggered the huge blaze, authorities are unsure of what caused a fire in the cargo section of Istanbul’s Ataturk International airport today. Air traffic in the area has been blocked, and thousands of people have been evacuated from the facility and the surrounding environs.

A short circuit may also be the source of the fire, which began in the cargo section where fuel depots are located.

A firefighter atop a tall ladder poured a stream of water on the fire, and a plane flew overhead, dropping a payload onto the flames — apparently fire retardant chemicals. But the flames rose above the building.

The authorities were struggling to bring the enormous fire under control. She said planes were not being allowed to land and were circling overhead.

She added that there were fears that the flames may jump to the main passenger terminal just a short distance away. 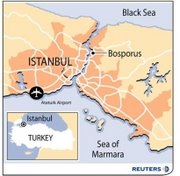