Home » Infrared detector resolution: how important is it for accurate thermal measurement? 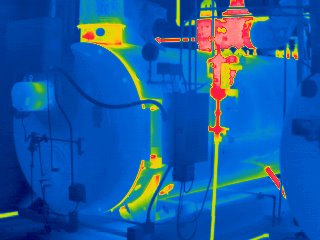 “Until recently, most buyers of infrared imaging cameras had to make a budgeting choice between a low-resolution 160×120-pixel camera or no camera at all, but they soon learned they missed a lot at low-resolution,” asserts Jon Chynoweth, vice president of Mikron Infrared. “Starting at about $25,000 and going up from there, professional high-resolution 320×240-pixel cameras were too costly for anyone who was not a full-time thermographer or not working for a company that could afford to buy expensive tools that might be underutilized,” he adds.

“That changed in 2005 with our introduction of cameras costing less than $15,000 that use a high-performance 320×240 microbolometer detector. Still, many users want to know: why is higher resolution important in thermal imaging? Why have the professional thermographers always been willing to pay the premium for the 320×240-pixel detectors used in uncooled, focal-plane-array cameras?”

Pixels are the data acquisition points for thermal measurement, and this data is used to create a visual image from the thermal profile, Chynoweth explains. “More data points mean more information is provided for accurate thermal interpretation. More pixels also mean greater visual resolution in the thermal image, so for a given field of view smaller details can be identified in the thermal image and accurately measured for temperature.”

Chynoweth says that to make IR cameras affordable to wider range of users, detectors with pixel counts of 160×120, with or without interpolation, were introduced as a low-cost alternative. “But this is one-fourth the resolution of the 320×240 detector: 76,800 pixels vs. 19,200,” he stresses. “The larger detector produces an image twice as wide and twice as high, with four times the data for a given field of view.”

For the working thermographer, high-resolution allows a camera to work at a much greater distance from a target without loss of temperature measurement accuracy, Chynoweth explains. “A target must cover at least 9 pixels on the FPA to be accurately resolved, or else the resulting temperature measurement will be compromised when the camera averages in extraneous background,” he says. The lower resolution detector interpolates a greater area between pixels and averages in temperature readings unrelated to the target. In practice, a target that’s 0.25 sq. in. can be accurately measured for temperature at a distance of 60 ft. with the 320×240 detector, while the 160×120 detector has to be at 30 ft. to ensure the same accuracy. (Distances based on a 25° x 19° lens).

“Resolution is even more important in infrared imaging than it is in digital photography, and everyone knows how photographers boast about the resolution of their newest digital cameras,” Chynoweth says. “In infrared, resolution affects temperature measurement accuracy, not just image quality. The 320×240 detector, with 76,800 temperature-measuring pixels, resolves an area smaller than a tenth of a square inch at six feet, while the 160×120 detector, with just 19,200 pixels, can’t image anything smaller than twice that size With more background averaged into temperature readings, the readings are inherently less accurate. Likewise, the low-resolution thermal image looks like it’s made of tiny little squares, no matter what the viewing size.”

Another fine point in detector design is fill factor – the space between pixels on the detector that has to be interpolated when the image is formed electronically. “The newest detectors developed by our company have reduced this spacing 25%, giving them the highest fill factor and best imaging capability in the industry,” Chynoweth concludes.

Security September 28, 2021
ARTPEC-8 supports analytics applications based on deep learning on the edge where cameras have processing power to analyze data within the camera itself.

Construction & Retrofits September 28, 2021
The MAGNETACH Tooling System is designed for use on single- and dual-head concrete grinding equipment with either left- or right-hand rotation.