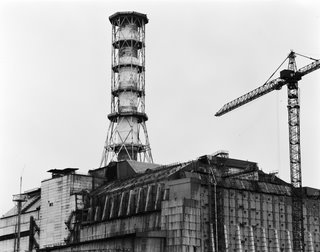 I came across several news items last week that described the events and consequences of the Chernobyl reactor accident from 20 years ago. Each message had an impact, but these photographs are extremely dramatic.

From the Press Kit:

No human being enlivens the desolate scene. No sound of activity penetrates the grim silence. Only the incessant wind seems to grab at everything and blows through everything.

Pripyat is affected most immediately by the reactor disaster in Chernobyl on April 26, 1986. Many people die, thousands suffer from the long term effects until today. Five million people still live on contaminated terrain.

Twenty years later a project of a special kind emerges here on the initiative of Vitali Shkliarou and Sergey Abramchuk who witnessed the catastrophe as a child. In October 2005 seven artists from Moscow (RUSSIA), Minsk (BELARUS) and Berlin (GERMANY) travel to the hostile restricted area. With their artistic work, they want to commemorate a catastrophe that can happen again anytime and should not do so.

The foundations of the work are the urban walls: Konstatin Danilov, Denis Averyanov, Ivan Malakhov, Kim Köster and Tobias Starke paint their pictures directly on the walls of houses and industrial facilities. The attempt to absorb the place in its alienated but depressingly substantial reality and to reflect it in their work stands in the foreground of their endeavour.

The artists approach the subject in different ways: Despaired faces appear on walls. It seems that you can hear their silent screams. In contrast to that a flower takes up the colour tone of withering leaves; thereby pointing at the revival of the vegetation; but in the end it is still a flower on a grave. Despite the large size of some pictures they stay reserved and fit in with the hortative and sombre cityscape. They blend into their surroundings respectfully. The images are recorded and transported by the photography and the films by Sergey Abramchuk and Niels Grugel.

The project hopes to draw attention to the place of events once again. With the pictures from the centre of the catastrophe it wishes to keep the memory of the suffering of the people alive. To arrest oblivion; to pause – and understand the responsibility for the future that is in our hands.

Radiating Places – A Requiem of a Special Kind 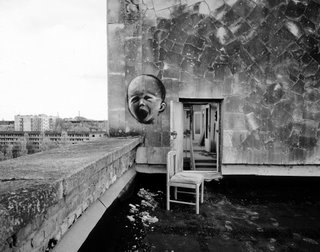