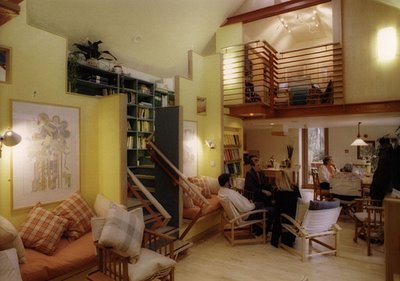 Yesterday, the hip Web news source, Slate, ran an interesting piece by its Architecture Critic Witold Rybczynski. The story was about Maggie’s Cancer Caring Centres in Scotland. The piece, which is offered as a slide show, explored the idea that good architecture can actually help cancer patients during the healing process.

There is no place as disheartening as a hospital. Not only because a hospital visit most likely means that you—or someone you care about—are sick but also because of the atmosphere and surroundings: bureaucratic, impersonal, disorienting. And usually ugly. Most hospitals are as utilitarian as bus terminals, with confusing corridors, plastic floors, harsh fluorescent lighting, tired plants. They are charmless places that seem calculated to drive even the healthy to despair.

In 1995, Maggie Keswick Jencks was dying of breast cancer in an Edinburgh, Scotland, hospital. She and her husband, Charles Jencks, a well-known architectural critic, talked about how the hospital environment affected the physical well-being not only of cancer patients but also of their families and friends. They imagined an addition to the cancer ward: small centers adjacent to cancer-treatment hospitals that could provide nonmedical care—mostly support and information—in a less institutional setting. The first of what came to be called Maggie’s Centres was designed by Richard Murphy Architects in a renovated stable next to Edinburgh’s Western General Hospital (above). It opened in 1996, shortly after its namesake’s death. In a typical year it serves as many as 3,000 new visitors—equally divided between cancer patients and their caretakers.