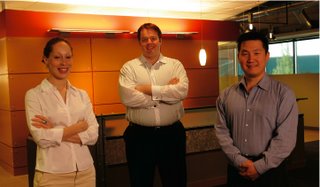 As might be expected, the theme for the 2006 Chandler Awards—Make Your Mother Proud—did not go unheeded. The Best of Show winner: Studio Meng Strazzara for the design of its downtown Seattle offices overlooking Puget Sound. The Excellence in Design winner: Pfeiffer Partners of Los Angeles for their work on the Cal State Fullerton Fine Arts Facility. Conceptually themed, “Simple, Elegant, and Green,” the new offices of Studio Meng Strazzara feature contemporary aesthetics with an exposed structure and mechanical system, in contrast to brightly colored walls and finishes with generous use of glass.

“We chose to use the simple and available building components in creative shapes, forms, and colors to create individual spaces without having walls on four sides,” says Chris Lee, designer. The proprietors wanted to make the narrow, raw unfinished space within the modern office building more open and flowing without impeding the view through its 15′ tall and 200′ long glass wall overlooking the Puget Sound and the Olympic Mountains. The environmental goal was no less ambitious: LEED® silver rating. The existing office furniture and furnishings from the previous office were reused to create innovative work spaces, and cutting-edge, energy conserving lighting strategies were incorporated. All construction components were non- VOC-emitting, environmentally safe, and contained recycled contents.

“Every product—from carpet to ceiling tiles—was chosen for its capacity to adhere to the design concepts and to further the healthy environment of green building design,” says Lee. The plan creates a generous office gallery within the circulation zone formed along the long western exposure laced with desirable views. The area highlights the firm’s work and in-house art while engendering collaboration and fun with soft chairs and informal meeting areas.

In the concert hall—the jewel of the project—the exposed, painted roof structure and ceiling beams are inspired by Gothic cathedrals. Plaster cones on the balcony fascias, richly painted in two-tone gold, soften the room’s geometry and articulate acoustically vertical surfaces, while large scale red, triangular “kites” communicate vertical energy and add a sense of intimacy. “Throughout the spaces, the materials and forms evoke the lyrical performances that take shape within,” says Murray.

The Best In Show and Excellence In Design winners receive $2,500 and $500 respectively and The Best In Show will be featured in a full page ad in Interior Design, IIDA Perspective, and Metropolis. Both winners received a trip to NeoCon 2006 for award presentation. The winners will also be featured in many collateral pieces, including patcraft.com, chandlerawards.com and Patcraft 2006 NeoCon space.

The Chandler Awards is an annual competition to engender strong commercial design and acknowledge design excellence using Patcraft Commercial carpets. The competition’s name recognizes the Chandler family’s founding of the company more than a half century ago. Patcraft Commercial Carpet is a Berkshire Hathaway company based in Dalton, Georgia, manufacturing carpet for the corporate, retail, healthcare, educational, and tenant markets.