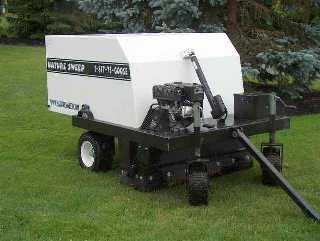 More practical than funny, today’s spotlight is on a new product that could soon be sweeping its way into the parks and fields of cities across the country—starting with Seattle, WA. The device is called Goose Goo Gone by Naturesweep, and it’s goal is to remove the waste caused by Canadian Geese, without injuring the birds or the greenery.

Municipalities face a serious challenge in both the migratory and resident geese populations. The birds are attracted to short grasslands, bodies of water, and open sight lines to better see predators. These features are common characteristics of municipal parks, artificial ponds and lakes, school yards and golf courses. Geese will also nest in less than ideal places, such as landscaped areas in parking lots, planters next to busy building entrances, or flat roofs.

Since the early 1960s when government wildlife agencies began an effort to rebuild goose populations, resident goose populations are on the rise. They are vigorous defenders of their young, raising an average of five goslings every year. They live a long lifespan of up to 25 years, and are very adaptable.

They also deposit up to five pounds of feces every day on public turf. A 52 acre recreational park in Nassau County, Long Island receives twenty tons of waste from the three to six hundred geese persisting there.

From the AP (by way of the Discovery Channel):

“It’s basically a carpet sweeper for grass,” said Ed Zylstra, inventor of the patent-pending Goose Goo Gone machine and co-founder of Naturesweep, based in Victoria, BC.

Zylstra, a welder, said he came up with the machine after goose droppings on Victoria play fields got in the way of a kids’ soccer team he coached. The four by four-foot trailer is towed behind a small lawn tractor. A gas-powered motor turns the nylon bristles to “tickle” the grass without damaging it. Droppings and other debris go into a hopper made of a special plastic that can hold up under nitrogen-laden droppings.

The company is providing a free test run for the city Parks Department, which has an agreement with the Progressive Animal Welfare Society to look into nonlethal means of controlling the problem.

If the machine passes muster with the city, it’s available for $13,000 —with discounts for multiple purchases. Zylstra said he would donate some of the proceeds to the animal welfare society.

Thanks to Erik Jacobsen for sending this along!