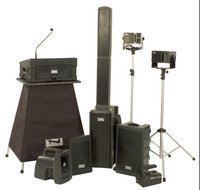 In an effort to squeeze maximum utility out of minimal equipment outlay, budget-conscious schools, hotels, churches, and other facilities are increasingly turning to the portable public address system as an answer to the high cost of installing a fixed system in every room where sound or music might be required. This trend toward opting for a mobile PA system that most anyone can quickly set up and use can yield savings over the limitations imposed by a fixed system.

An outdoor amphitheater might require a sound system, another might be required in the auditorium, and yet another might be required in the gym. Further, classrooms and conference rooms have ever-increasing requirements for sound equipment. Permanent, installed sound systems for each of these locations would be cost prohibitive for most institutions; however, one or two shared portable systems could provide a solution at an affordable price.

In recent years, portable sound system technology has evolved to provide a serious alternative to installed sound systems. In many cases, a portable system will actually deliver clearer sound than an installed system because all of the components are designed to work together as a package. The amplifier, mixer, microphones and speakers are factory engineered to work together without distortion. In a permanent installation, the professional sound contractor attempts to achieve this balance of components with varying degrees of success.

“Today, sound systems are vital in the classroom,” says Summer Vyne, team supervisor with CCS Presentation Systems, of Scottsdale, AZ. “A great deal of content now is being delivered via CD from publishers, instead of books. A lot of the curriculum now has sound to it. Portable systems are the solution so teachers can share, as they may not have the funds for everybody to have one installed in the room.”

Vyne says, “the portable solution in a classroom averages $120 – $150, depending on the options. It would average $1000 plus for an installed solution, because you have to pay for 5 – 6 speakers in the ceiling to have the coverage, all the wiring, the amplification system, maybe a wireless microphone. Then, whatever they want to plug into it — a mixer, a DVD/VCR, or other components.”

Dave Johnson, acount executive with Troxell Communications, adds, “For a larger venue such as an auditorium, a portable system would run around $2,000 and a permanent system would be $13,000 and up,” he says.

The high cost of permanent systems comes from the separate components that must be purchased, including amplifiers, CD players, mixers, and speakers and the skilled labor to assemble and operate the system. But the portable systems are built to be all-inclusive of these components. “In most cases, different elements are already built in or listed as accessories,” says Johnson. “The packages also allow for expansion.”

Another factor which plays into economy is ease-of-use, as the majority of schools and such institutions don’t have on-staff sound engineers. “The installed systems get a lot more complex,” says Vyne. “They come with their own sound boards and equalizers. When you get into an installed system, you’re going to have a lot more buttons and it can be very intimidating for someone who doesn’t know a lot about sound. We usually have to train the users on them. The portable systems are pretty self-explanatory. They have a lot less adjustments on them.”

Johnson agrees. “With the higher-end hard-wired systems, we have an on-staff sound engineer we send out for free with the first use of the system to show them how to use it, and if need be he can be hired for subsequent performances” he says. “The portable systems are much more functional and much easier to train people to use. The buttons are labeled for an individual, not a high-end engineer. Everybody and their brother can just turn it on and get it rocking.”

The portable systems also carry another advantage for most users – there’s no installation involved. “We can almost direct-ship them to teachers and they or school personnel can easily set them up,” says Vyne.

“With hard-wired systems it takes installers and there’s labor involved,” she says. “Sometimes with schools it can be difficult, especially if they’re older. They have to spend a lot of time putting up conduit because they have hard ceilings and hard decks. The portable systems are made to be very easy and quick to set up, and very easy and quick to use. You just set it up and off you go.”

Portable sound systems provide an economical, flexible, reliable and easy-to-use alternative to installed sound system. They are becoming the product of choice for high quality public address in the institutional marketplace.