Home » Friday Funny: Only Guy Who Puts Paper In Copier Considers Himself A Hero 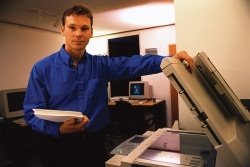 Today’s Friday Funny comes from The Onion, which can be found online at www.theonion.com

Only Guy Who Puts Paper In Copier Considers Himself A Hero

“You may not know him by name, but Eric Greeley is one of a new breed of Americans making a difference. While most employees at John Hancock Security and Financial Services just use the photocopier and walk away, Greeley considers it his duty to do the right thing: to make sure the machine is stocked and ready to go at a moment’s notice.

Greeley doesn’t ask for recognition, and he doesn’t get it.

Though he’d never say it himself, that’s just what a hero does.

“I like to think that anyone in my position would do the same thing,” said Greeley. “In the end, it’s such a small sacrifice for a far greater good. All you have to do is go get the paper, pop out the input tray, fill it to exactly the right level, and slide the tray carefully back in. I’m doing my part to make the world a little better, one ream at a time.”

Greeley’s philosophy is that a good deed is its own reward, and it seems to be paying off for the whole office: His refilling actions have single-handedly increased his department’s productivity by an estimated 2.6 minutes a week.

“Is it glamorous?” Greeley asked. “No. But doing the right thing never is.”