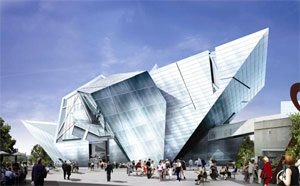 Daniel Libeskin’s new addition to the Denver Art Museum, the Frederic C. Hamilton building, is an impressive geometric shape made of glass and titanium. Richard Lacayo of Time Magazine reports:

“It’s hard to believe that the majestic new addition to the Denver Art Museum is Daniel Libeskind’s first completed building in the U.S. In 2003 Libeskind won the competition to design the master plan for the World Trade Center site. For the next year or two, he was so pervasive a media presence–the black glasses, the Polish accent, the inexhaustible cheer–that you half expected a spiky Libeskind tower to erupt soon on every street corner. Then the Trade Center project got away from him. The New York City developer who held the lease on the Twin Towers brought in his own architect to “collaborate” on the centerpiece Freedom Tower. Libeskind, who was a canny enough player to have ushered a Jewish Museum into the heart of Berlin, was gradually marginalized. By the time construction began in April, the much revised skyscraper bore so little resemblance to his original idea, he had taken his name off it.

What he knew then, what we all know now, is that 1,600 miles away in Colorado he had a considerable ace up his sleeve. Six years ago, he had won a competition to design the addition to Denver’s principal art museum, which its director, Lewis Sharp, was pushing to expand into a more significant institution. At the time, Libeskind, now 60, had completed just one major commission, but that building was the Jewish Museum, an architectural thunderbolt that would be endlessly talked about, contested and studied for its zigzag configurations. It took a leap of faith for Sharp and his trustees to place what would become a $90.5 million project in the hands of an architect in love with tilted walls and corkscrewing interiors. But it was a gamble that has paid off spectacularly. Libeskind’s museum addition, which opens Oct. 7, is the most captivating building to appear in the U.S. in a while, the first to compare in complexity, daring and brave-new-world beauty to the Walt Disney Concert Hall in Los Angeles that Frank Gehry set loose three years ago. If anyone doubts that Libeskind’s ideas are a route to a powerful new model of space and form–and there are people who still think of his work as eccentric grandstanding–this is a building to change minds.”

To read the rest of this story, click here.
This article was originally published Sunday, September 3, 2006.