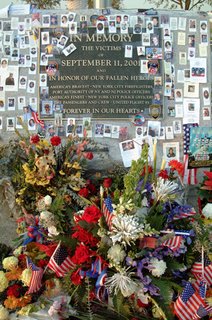 Earlier this week, many hundreds of Pelco employees, honored guests, and the public joined together in commemoration of the Fifth Anniversary of September 11, 2001, and to celebrate the lives of the fallen heroes from that day.

The solemn ceremony, which began at 8:30 a.m., was held at the California Memorial – a permanent monument in memory of all the victims and fallen heroes of September 11, 2001. The ceremony included the lowering of the California Memorial flag to half-staff, and a wreath procession with motor escort accompanied by a piped rendition of “Amazing Grace.” A twenty-one-gun salute, Combined Command “Fly Over,” and singing of the National Anthem followed.