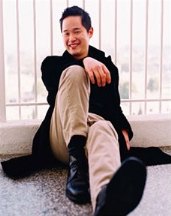 Allsteel and IIDA (International Interior Design Association) are proud to sponsor the keynote address of environmental lifestyle expert Danny Seo at the NeoCon East Trade Fair 2006, returning to Baltimore, October 11-12. Attendees will have the opportunity to participate in a discussion with Seo at noon on Thursday, October 12, at the Baltimore Convention Center. Seo’s address, entitled “The Simply Green Office: From Stressed Out to Blissed Out,” will concentrate on an eco-friendly office environment.

Through his bestselling books, his how-to lifestyle lectures, weekly Sirius Satellite Radio program, and his upcoming companion TV show, Seo continues to share his creative ideas that have made him one of America’s leading lifestyle authorities on modern, eco-friendly living. His lifestyle book, Conscious Style Home, received rave reviews in The New York Times, Elle, Food & Wine, Elle Décor, and USA Today, the latter noting: “Say ‘environment’ to Danny Seo, and it’s as if you’ve punched the word into the search engine Google: Out roars an avalanche of ideas and references that threatens to scramble your brain.’”

Seo has received many prestigious honors because of his activism throughout the years, including the Albert Schweitzer Reverence for Life Award and the Oprah Winfrey Angel Network Award for outstanding community service.

Born on Earth Day, Seo has championed on behalf of the natural biodiversity of our planet from a very young age. On his 12th birthday, he founded the organization Earth 2000. Five years later, he transformed the grassroots organization in the country’s largest teenage activist charity, spearheading worldwide campaigns on behalf of the environment.

As Editor-at-Large of Country Home magazine, Seo pens a monthly column for the magazine and produces feature stories for the magazine’s 7.6 million readers. Each month, his “Fresh Thinking” column features clever and easy ideas to recycle anything into chic home accessories with quick and easy tips that prove green living can be gorgeous living too.

Seo has been named one of “40 Under 40” to watch by Crain’s New York Business and, on a lighter note, one of People magazine’s “50 Most Beautiful People in the World.” He stars in a nationwide TV public service announcement campaign airing on HGTV and TLC encouraging Americans to recycle their old cell phones through a nonprofit program called Call2Recycle.

A popular speaker at colleges, corporations, and special events, Seo has given hundreds of keynote addresses, including those at the College of William & Mary, The State of the World Forums, and the National Kitchen & Bath Association. In May 2006, he gave the commencement speech to the University of California Berkeley’s graduating class.

Attendance at the keynote address is included with NeoCon East 2006 registration. Go online for more information about NeoCon East or to register.

The International Interior Design Association (IIDA) works to enhance quality of life through excellence in interior design and to advance interior design through knowledge, value and community. IIDA is a professional networking and educational association of 10,000 Members in eight specialty Forums, nine Regions and more than 30 Chapters around the world.