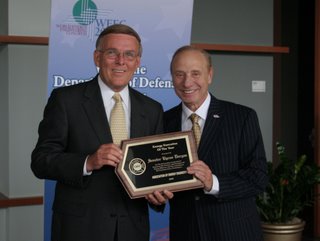 Among his many achievements in the field of energy, Senator Dorgan has been a leader promoting ethanol, fuel cells, and wind energy. As the ranking member on the Appropriations Interior Subcommittee, Senator Dorgan has fought back against presidential budget cuts to energy efficiency, working to restore funding for vital DOE and EPA programs each year. Senator Dorgan has also worked diligently to enact new efficiency standards for commercial equipment as part of the Energy Policy Act of 2005.

The Association of Energy Engineers, through its annual awards program, recognizes individuals for their outstanding contributions to the energy efficiency, renewable energy, and sustainable energy fields. According to Albert Thumann, executive director of AEE, “We are pleased to present Senator Dorgan with the 2006 Energy Executive of the Year Award. His work and leadership has helped to shape an energy roadmap geared towards improving the U.S. Energy Security landscape, helping to make U.S. businesses more competitive in a global marketplace and enhancing the environment.”