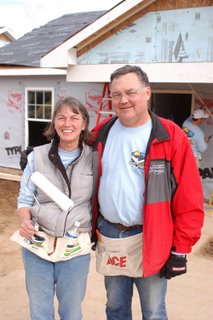 In the spirit of the holiday season, Hickory Hardware™, an American designer, manufacturer and marketer of decorative, functional, and industrial hardware, recently participated in Habitat for Humanity’s 10-home build in Nashville, Tennessee on November 6-11. A new member of the Nashville community, Hickory Hardware provided volunteers and donated door hardware products for the five day build.

Habitat for Humanity has helped change the lives of more than 30,000 American families since its founding in 1978. The new Building Blocks program, hosted for the first time by the Nashville Area Habitat for Humanity, is designed to engage people from around the country in an effort to raise awareness and help eliminate substandard housing in the United States. This around-the-clock build included the construction of 10 homes for Habitat for Humanity families on one residential housing block in Nashville’s Providence Park area.

Among the volunteers participating in the project were Hickory Hardware’s president, John Westendorf, his wife, Cari Lou, and John Pelka, vice president of marketing. In addition to helping with the build, Hickory Hardware also donated interior and exterior door hardware products for all 10 homes.

“Hickory Hardware played a big part in the effort to build these 10 homes,” says Chris McCarthy, CEO, Nashville Area Habitat for Humanity affiliate. “John Westendorf and his wife, Cari Lou, and John Pelka were up and at the build site before the crack of dawn. Thank you to Hickory Hardware for sharing such talented, wholehearted people within your corporation and for donating hardware products for the homes.”

“Giving back to the community is something that our company strongly believes in,” says Westendorf. “Nashville is Hickory Hardware’s new home and we are excited that we could contribute in a small way to the Building Blocks program and to this community that has been so welcoming to us.”