For those of you who missed the headlines yesterday, this story is too ironic for any facility manager to ignore. Talk about your worst nightmare!

From the official site of the Intrepid Sea, Air & Space Museum:

On November 6, 2006, the aircraft carrier Intrepid was scheduled to be towed from its home at Pier 86 to Bayonne, NJ for restoration and refurbishment. Unfortunately, the huge amount of silt that has accumulated underneath and around Intrepid over the past 24 years prevented the ship from being successfully removed. The Museum administration, together with maritime experts, is evaluating the best way in which to address the current problems and to get Intrepid underway.

While there are some denials that all efforts to move the ship have been scrapped, it seems unlikely that the World War II aircraft carrier will be going anywhere anytime soon.

Here are more details on the snafu, courtesy of Alan Cross, of Earth Times:

The USS Intrepid, the World War II vintage ship that is a floating military museum today, got stuck in the mud in Hudson River Monday as it prepared to leave the New York dock for a $60 million makeover. 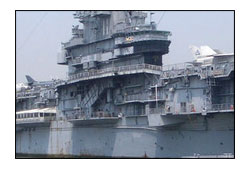 The 872-foot-long aircraft carrier, which survived bombings and kamikaze attacks, got stuck in the mud as a fleet of tugboats tried to pull it down the Hudson River, past the Statue of Liberty and into a dry dock in Bayonne, New Jersey, for the renovation. The journey was expected to take about eight hours.

Six tugs were employed to pull the ship, but it moved just 15′ before plunging in the mud. Even a high tide could not free the 27,000-ton ship. The ship has no engines, but its 15-feet-diameter propellers are in place and it is learnt that it was these propellers that got stuck in the mud.

Bill White, president of the Intrepid Sea, Air & Space Museum, said he cannot say whether an attempt would be made to move the ship immediately or refurbish it at the spot where it is located.The refurbishment work included opening up more interior spaces to the public, upgrading its exhibits and a bow-to-stern paint job.