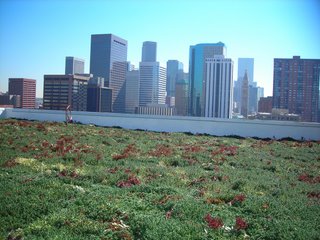 The city's new 232,000 square foot U. S. EPA building, set to open in a few months, was constructed with an eye toward resource and energy efficiency. The building aims to earn Gold certification under the U.S. Green Building Council’s Leadership in Energy and Environmental Design (LEED) Rating System.

The building is part of a citywide effort announced by Mayor John Hickenlooper; the extensive sustainability initiative is dubbed “GreenPrint.” The plans aims to convert city vehicles to hybrids, reduce energy use in city buildings, and build solar and methane power plants by 2007.

In addition to the green roof on the EPA building, environmentally and energy preferable building products and materials were used throughout, as were photovoltaic arrays and wind turbines to generate electricity.

“The architects and developers wanted a green roof for several reasons,” says Sandra McCullough, with Weston Solutions, Inc., the company that installed the roof. “One of the main reasons is that Denver has strict stormwater runoff guidelines, and a green roof helps reduce runoff considerably.” McCullough adds that the architects and developers also wanted a green roof because it helps reduce energy costs and can contribute to as many as seven points toward LEED certification.

The green roof installed is an extensive green roof with low-growing vegetation such as sedum, grasses, and other hearty, drought-resistant plants installed in four or five inches of growth media (soil). However, they had to choose between a built-in-place system (where soil is placed right on the roof and plants are put in, as in a traditional garden) or a modular system.

With a modular system, vegetation and growth media are preplanted in modules made of 60% recycled plastic. The modules, which come in varying sizes, are then placed on the existing roof, one after another. McCullough notes that the modules can be picked up if the roof’s photovoltaic panels or other mechanicals need servicing and then replaced when repairs are completed. Also, because the modules can be pre-grown at the nursery, they can be delivered to the jobsite when needed. This also allows the plants an opportunity to grow out in their installed state.

The green roof will be included in a green tour of Denver scheduled for the upcoming GreenBuild Conference, which will take place in Denver on November 15-17.

FM Alert June 7, 2021
The new standard has two performance levels, for 400-pound users and 600-pound users, and applies to lounge and public seating.