In owner operated and occupied facilities, the condition of the roof is frequently a cause for concern. Not only the first line of defense against any type of severe weather, many commercial roofs are also expected to support heavy equipment, sophisticated technology, and architectural elements. Currently, economic conditions, innovative coating products, and worst case scenario performance are the three predominant drivers dictating the decisions being made by facility managers (fms) looking to preserve their overhead assets.

In February 2008, President George W. Bush signed into law H.R. 5140, the Recovery Rebates and Economic Stimulus for the American People Act of 2008. This law increased the expensing allowance for small businesses (from $128,000 to $250,000) with a maximum investment phase-out threshold of $800,000. It also temporarily changed the tax code to allow U.S. businesses to deduct 50% of certain depreciable property that year.

When the law was passed, Bill Good, executive vice president of the National Roofing Contractors Association, said, “The bill will spur investment in the roofing industry by providing contractors, suppliers, and manufacturers with critical incentives during the slowdown in construction to purchase new equipment and provide for the long-term health of their businesses. During the early part of the decade, similar provisions included in the landmark 2001 and 2003 tax relief packages were instrumental in getting the nation’s economy back on track.”

Experts at Romeoville, IL-based Environmental Liquid Membrane System® prompt fms to remember that the repair and restoration of roofing systems is considered a maintenance item and is given special tax treatment. Under IRS regulations, a roof recovery or removal and replacement is a capital expenditure and subject to a 39 year depreciation schedule under current regulations.

So as the economy continues its skid, roofing projects are still in the spending spotlight. Michael Gray, national sales director for Chapman, KS-based Roofmart International, says, “The economy is heavily dictating the evolution [of roofing decisions] as many fms are looking to save by repair and restoration instead of replacement. Many fms are dramatically shifting towards repair, maintenance, and restoration as companies are trying to stretch their money as far as possible.”

Public sector roofing projects (particularly those associated with schools and universities) are more than likely to get a boost from the economic stimulus package passed by Congress and signed into law earlier this month—particularly if they are deemed “shovel-ready” (meaning they can be up and running within a relatively short period of time). This new political buzzword is being applied to infrastructure projects that have already progressed through the planning and approval processes.

NPR’s Brian Naylor reports, “The stimulus bill states that for a project to be considered shovel-ready, it must be ready to begin in 90 days.

“In Wisconsin, Democratic Governor Jim Doyle has set up an office to review projects in his state that are ready to go. But Doyle’s to-do list goes beyond fixing roads and bridges. The governor hopes to use some of the stimulus money to make repairs in the state’s university system.

“‘These are things like putting a new roof on here, adding an addition, improving the science labs—things that do not require great designing and engineering but just work that can get done right away,’ Doyle says.” [“Stimulus Bill Gives ‘Shovel-Ready’ Projects Priority,” Morning Edition, February 9, 2009].

Getting A Fresh Coat

In many instances, preventive action is one of the most important investments fms can make. “Fms are aggressively searching for ways to extend the service life of their initial roofing investment through maintenance options,” explains J.K. Milliken, vice president and general manager of Republic Powdered Metals, Inc of Medina, OH.

Gray agrees. He says, “This, coupled with the increase in green and energy related solutions, is driving the decisions in today’s market.”

In the white paper entitled, “Roof Maintenance: An Important Factor in Making Your Roof Last Longer,” experts at Saginaw, MI-based Duro-Last Roofing suggest that maintenance is one of the easiest factors to control, yet many fms neglect routine checks for signs that could indicate premature failure. Ignoring seemingly small roofing glitches can create huge problems in the long run. For example, a small hole in a roof will cause a leak that, if not repaired, can saturate the roof deck and insulation and cause significant damage to the interior of a building and its contents.

The crucial times to complete maintenance checks are during the fall and spring. In the fall, leaves, branches, and debris can collect on a roof and clog drains and vents, causing ponding water to accumulate or damage the roof. In the spring, a change in the weather can cause snow to thaw, re-freeze, and then thaw again, which can clog drains and vents and put more stress on the roof. During both seasonal inspections, HVAC units, skylights, and any other rooftop equipment should also be checked for problems that could cause roof leaks.

According to roofing industry experts, the latest coating products can also help fms fight against a roof’s unavoidable natural enemies: age and weather. Some materials have reportedly been able to extend the lifespan of roofs by several years, if applied before a critical system breakdown takes place.

Jim Jannasch, director of product development for Firestone of Indianapolis, IN, provides the following example. “With EPDM roofs, seams and flashings can be cleaned and primed and new flashing applied. The membrane itself can be cleaned and coatings applied that have lifespans of 10+ years and re-coated virtually indefinitely.”

Milliken adds, “My experience is that more and more fms are being proactive in managing their roofs, enabling them to restore vs. replace. The cost savings is significant.”

These new coatings can help fms save money in terms of energy and replacement costs, but first and foremost, they protect against severe conditions and the damage that come along with them. “Facility professionals have to ask, ‘how well will the roof perform in a worst-case scenario such as a hurricane or fire,’” says Terry Holman, president of Ontario, CA-based Met-Tile, Inc.

Gray acknowledges the need for UV resistant topcoats as a significant trend, while Reinhard Schneider, technical and product development manager of commercial roofing with Atlanta, GA-based Georgia-Pacific Gypsum, feels water is the real enemy of many roofs.

Fortunately, he says, “There have been new developments in coatings to protect existing roofs from weather conditions such as extreme temperature fluctuations, freezing, and thawing. With existing single ply roofing membranes, polymer coatings protect the surface and extend the life of the roof.”

High performance paint coatings can help extend the lifespan of metal roofs as well, according Holman, who explains, “Today’s finishes are designed to withstand many years of sunlight, moisture, and other punishing conditions. When the finish eventually deteriorates, the roof panels can usually be repainted rather than replaced—a much less costly and more sustainable approach.”

Jannasch notes, “Roofs now need to sustain higher wind resistance than ever before due to damage from recent hurricanes, thus building codes are becoming more stringent in their wind uplift requirements.”

Fms have a few options in terms of getting the best performance out of their roofing systems. And with the growing significance of return on investment (ROI), facility professionals are making smarter choices.

“Facility executives are better informed on what products will provide them with the best value and deliver a positive ROI,” Schneider states. “The promise of using a superior product that exceeds structural standards and delivers positive ROI is becoming a strong motivating factor,” he adds.

Most fms are willing to pay a little more for durability and added performance to ensure a long lasting facility and reduce expensive callbacks. Schneider points to resources such SPRI (Single Ply Roofing Industry) and ARMA (Asphalt Roofing Manufacturers Association) for information about the longevity of roof systems and recommends services provided by organizations like RCI (Roof Consultants Institute) for assistance with major roofing decisions.

Considering the overall expense of a roofing system, it’s essential for fms to consider the entire life cycle of the investment. A high quality roofing system and good maintenance practices can also protect the building and its occupants, conserve energy, and ensure uninterrupted function of the building. 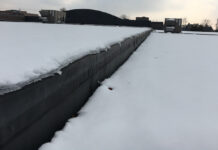