As more facility managers (fms) consider the use of renewable energy, it is important they evaluate the various source types (e.g., solar, wind, geothermal) for their particular needs. Fms can keep several aspects in mind during the evaluation and decision making process. Questions to consider include: What do we want to gain with renewable energy? Can our site/building accommodate the physical infrastructure? What are the costs/savings, and what financing options are available to us?

Capturing the heat of the sun with soloar photovoltaics (PVs) for electricity production can enable fms to reduce (or eliminate) the energy their buildings consume from power plants. The benefits of a proper system are twofold—solar energy is a renewable source that does not produce greenhouse gas emissions in its energy production, and, once the system is paid off, the organization will have a reduced, or eliminated, electricity bill.

The Solar Electric Power Association (SEPA) in Washington, DC estimates that on-site PV installations currently produce 1,200 megawatts (MWs) of power in the United States. This figure includes commercial, institutional, and residential facilities, and Mike Taylor, director of research and education for SEPA states that the commercial and industrial systems account for between 800 MW to 900 MW.

Says Taylor, “PV systems at commercial and institutional buildings make up about 10% of the number of installations; however, those systems are larger than a typical residential system. So commercial rooftops are key to the market growth we have seen over the past five years. In terms of overall aggregate megawatts, it’s the commercial market driving things right now.”

Evaluating the potential of a solar PV system begins with discovering how much energy might be produced at a given facility. The answer hinges on two things for most fms—how much sun resource is available and how large of an area (whether rooftop or ground) will be dedicated to the installation. 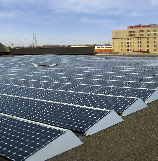 Taylor points out, however, that solar resource is only part of the puzzle. “Calculating potential energy production is the first of three things that needs to be examined,” he explains. “The second factor is the facility’s electricity rates, and the third is the existing policy in that specific location. Rate structures are very important to the economics of PV.” [For a link to a report from Lawrence Berkeley National Laboratory on the impact of rate structures on the economics of PV, see the end of this article.]

In terms of policy, the federal government has solar incentives in place, but fms will first want to look on the state level; they’ll also want to look into incentives from utilities. The Database of State Incentives For Renewables & Efficiency (DSIRE) is a comprehensive resource (www.dsireusa.org).

“There are a lot of states in the waiting,” says Taylor. “Maybe [state legislatures] have recently passed policies, but it takes a few years for the programs to ramp up. North Carolina, Maryland, and Oregon have had a lot of acitivity lately. And Missouri just passed a new law that has a solar requirement. There are states like these that if you look at existing data; they’re not on the radar but in one to three years’ time, they’ll start to move forward.”

One trend Taylor sees is facilities obtaining solar electricity through a financing mechanism, called a Power Purchase Agreement (PPA)—sometimes referred to as a “solar services model.”

Under a PPA, a third party pays for the PV equipment installed and the subsequent maintenance at a facility, which enables fms to access solar energy without the capital outlay and maintenance costs. The facility pays for the electricity produced over a pre-determined contract term (ranging from five to 25 years)—usually rates are competitively priced against standard utility rates. Meanwhile, the financing entity owns the system and benefits from related tax benefits. At the end of the contract, the facility has the opportunity to purchase the system.

Thomas Leyden, managing director for east coast operations, SunPower Corporation, says of PPAs: “It has been a trend in the industry, and it makes sense, because to scale solar energy you need to finance these systems. Companies like Wal-Mart or JCPenney are unlikely to spend their own capital on building hundreds of solar projects, for instance.”

As PPAs become more common, fms want to be sure the solar company they choose is qualified. Fms can work with a company like SunPower to ensure a smooth process. Says Leyden, “It is important that the company chosen has experience with PPAs and that they have financing lined up.” It is also important to note that the PPA financier will have rights to the facility’s roof through the term of the contract—even beyond maintenance activities.

Another financing option is to lease a PV system. In this scenario, a financier would pay for the system, and the facility then leases it and uses the energy for a period of 10 to 15 years. There is also the option to renew at the lease end or to buy for a residual value. Tax benefits go to the lessor during the leasing period.

Says Leyden, “If it’s done right, a facility’s energy savings will be more than the lease payment. And if structured correctly, a facility will save enough money cumulatively for the cash payment to purchase the system at the end of the term.”

Another way fms can get involved with solar energy—one which generates revenue for the facility—is by allowing a solar company to install, operate, and maintain a PV system on its property. The facility does not use the energy produced; it is consumed elsewhere. This is starting to emerge in areas where utilities are looking to expand their renewable energy portfolios. SEPA’s Taylor explains, “Southern California Edison has announced it wants to put panels on rooftops and is looking to lease space,” he says. “It’s a pretty niche thing right now, but five years from now, it could be an interesting model.”

As solar energy continues to gain ground, fms have a variety of financing tools available to them. Whether buying upfront and seeking tax and other incentives or entering into a PPA or lease, there are ways to get the funds to harvest the sun.

Research for this article included interviews with Leyden (http://us.sunpowercorp.com/) and Taylor (www.solarelectricpower.org).

To request a copy of the Lawrence Berkeley National Laboratory report, send an e-mail to [email protected].