In honor of the Super Bowl, this Friday Funny article salutes an innovation that may literally shake up the way stadiums, restaurants, and other high volume brew purveyors serve their customers forever…but without the foam! A Montesano, WA-based company called GrinOn Industries has launched a new beer dispensing system that maximizes output while minimizing waste. In other words, GrinOn has transformed dispensing beer from a skilled craft into a science.

Some of you may have seen this viral video already, but if you’re not sure what it’s all about, check out this impressive demo:


Here’s an explanation, from the company’s website:
Foam happens, but it is always caused by something, sometimes the same thing over and over, especially with a conventional system—the “human element.” Common human element issues talked about between managers and trainees include:

The best way to mitigate foamy beer is to understand what is causing it, so that problem can be managed. GrinOn measured everything so it all could be understood and managed. And with the GrinOn system, the human element issues are practically removed.

So how does it work? Dan Wetzel of Yahoo Sports writes,

The key is the use of a cup that features a hole at the bottom and small, circular magnet that rests over it. When placed on the system, the magnet is lifted up by the pressure-driven beer. The cup fills up until the weight of the liquid pushes the magnet back down over the hole. The cup can then be lifted off and the beer consumed as normal.

Old school bartenders may believe the system means they won’t make as much money, but that hasn’t been the case for those who have used the equipment. Because they are selling more, they make more. It’s also entertaining for people, so they usually show their appreciation–sometimes with a tip, sometimes with a thumbs up of approval, and sometimes with both! See this video taken at Boston’s Fenway Park:


So next time you’re standing around waiting for a beer, remember, there are other options (unless you drink Guinness)! 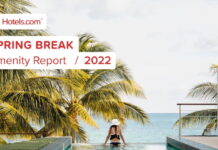 Top Hotel Amenities Travelers Are Searching for in 2022