With competition for open positions remaining high, the added pressure and stress may be causing some job seekers to make unnecessary mistakes during their interviews that could cost them the job. A new nationwide CareerBuilder survey of more than 2,400 hiring managers conducted November 15 to December 2, 2010 reveals the outrageous and common mistakes that some candidates have made in job interviews.

When asked what the most outrageous blunders they had encountered interviewing candidates were, hiring managers reported the following:

In addition to the most unusual gaffes, employers shared the most common mistakes candidates made during an interview:

“The good news is that the number of open jobs continues to improve month over month, however competition will remain high for some time to come,” said Rosemary Haefner, vice president of human resources for CareerBuilder. “The goal of any interview is to stand out from the other candidates and ultimately land the job, but make sure you stand out for the right reasons. Even though the job search process can be frustrating, candidates should stay positive, focus on their strengths and be prepared on how to best sell their skill set.”

At least candidates are no longer wearing flip flops with business suits anymore…one of the observations captured in an earlier CareerBuilder poll on the same subject. 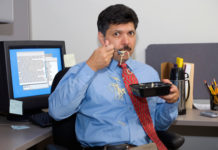 Friday Funny: Is Your Job Making You Fat?