With rising energy costs and an increased accountability to operate efficiently, facility managers (fms) are tasked with finding innovative ways to shave costs without cutting corners. Air conditioning has long been considered the default method of controlling comfort in a space, but the expenses can be substantial, depending on building size, occupancy level, and required tonnage. Using high volume, low speed (HVLS) fans alone or in tandem with heating, ventilation, and air conditioning (HVAC) systems is an option for controlling energy costs without compromising comfort.

In warmer months, these large fans improve personal comfort with an evaporative cooling effect; although fans do not lower the air temperature in a space, the perceived effect can make a person feel 8°F cooler. As a result, fms in air conditioned spaces are able to raise the thermostat several degrees without sacrificing comfort. The added circulation provided by HVLS fans also decreases the load on an HVAC system, and in a new construction scenario, they can lessen the amount of ductwork required to distribute air.

Large diameter fans are also capable of destratifying a space in the winter, reducing energy consumption by as much as 30%. (Actual savings will vary based upon a number of factors, including insulation levels, room size, and heating method, but as a rule of thumb, a 1% reduction in heating costs can be achieved for every foot of ceiling height in a room—capping out at about 30′.) Heated air from a forced air system (100°F to 125°F) is less dense than the ambient air (65°F to 75°F), and hot air naturally rises to the ceiling. By slowing the speed of an HVLS fan to 10% to 30% of its maximum rotations per minute (RPM), warm air is redirected from the ceiling to the occupant level, increasing employee comfort and reducing the amount of heat lost through the roof.

Although the basic principles are parallel to industrial models, some commercial grade HVLS fans are designed to be sensitive of sound requirements in the aforementioned spaces. The level of noise produced by those systems employing a gearbox depends on how precise the gears have been cut. Meanwhile, some HVLS fans operate inaudibly, due to the absence of a gearbox; these use direct drive motor technology instead. Additionally, on-board controls in some models have eliminated excessive distance between the motor and the variable speed drive (VSD), thus preventing noise caused by EMI (electromagnetic interference) or RFI (radio frequency interference).

To put the application of commercial HVLS fans in a more practical light, a school library can exemplify some of the challenges and solutions. Fan speed in this environment is based on a number of variables, including the season in which it is being used and the activity level of a room. Low speed is typical when the HVAC system is in the heating mode (i.e., winter months) in order to bring the hot air down without creating a draft or disrupting papers.

By keeping the heat at the occupant (or thermostat) level, running time is reduced, decreasing the stress on the heating system itself. In the summer months, an HVLS can improve comfort while decreasing the reliance on air conditioning in a given space. The air movement can also improve indoor air quality and increase the ventilation effectiveness of a space by directing fresh air to the occupant level. The constant airflow provided by fans also eliminates hot and cold spots that could ultimately facilitate mold growth. [Source: www.epa.gov/iaq/schools/tfs/guideh.html#Air-Conditioned%20Spaces.]

These large fans are also cost-effective to operate, since they use small motors (no larger than 2 hp) relative to their size. The Table shown here summarizes the energy consumption and costs for operating an HVLS fan with a 12′ diameter. In the cooling mode, these types of fans are primarily required to function during occupied hours, because they largely impact occupant comfort. In destratification mode (during cooler winter months), commercial grade HVLS fans often operate for extended periods to prevent extreme temperature differences; this can alleviate the load on the HVAC system.

Whether a building uses a five ton rooftop unit or a 2000 ton chilled water system, HVLS fans can help increase operating efficiency and occupant comfort. Certain tangible benefits that exist but are difficult to quantify include boosts in morale, attendance, and productivity in non-conditioned spaces. For these and many other reasons, fms may want to consider implementing large fan technology into their buildings.

As a marketing analyst for the Big Ass Fan Company, Reed specializes in the operation and application of HVLS fan technology. He has lent his expertise at various trade shows and contributes regularly to publications centered on sustainability, energy savings, and effective green building practices. 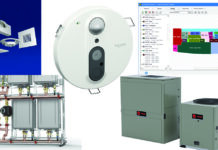