Home » Magazine » Columnists » Technology & FM Column » The Facility Technologist: High Tech Buildings Are Only As Productive As Their Backup Power

With all of the innovations going into buildings today, it is important for facility managers (fms) to think about what happens to those devices when the power goes out. Unlike many older technologies, today’s computer-based facility technologies are more sensitive to power disturbances and often use more power than their 20th century counterparts. And backup power is an absolute requirement if facilities are going to function during an outage.

The first thing most fms think about when they hear the term “backup power” is the facility’s emergency generator. But there are some aspects of backup generators that many fms aren’t aware of—until the power fails.

The first consideration is the capacity of the generator. Many fms are not aware of what circuits are connected to the generator and may mistakenly assume that critical systems are backed up. Often, only emergency lighting, fire systems, and sometimes a few elevators are on the backup generator. Most notably, HVAC is usually not on generator power, because it is such a huge power load. This may not be a problem in most of the facility, but heat sensitive computer-based systems will quickly overheat and fail if they are not cooled.

The Achilles’ heel of generators is, like most other systems, proper maintenance. If the generator is not maintained, it is not going to start when needed. The heart of a generator is usually a piston engine like those found in cars or trucks. And, just like a car or truck, if it sits for years without running (or parts are allowed to rust or rot), it will not work. Backup generators need to be on an automatic start test schedule and should be full load tested once a year to assure they will perform.

Also, while generators supply power, they do not ensure constant power; there is a short period of time between power failure and generator startup. In many systems (such as lighting), a brief interruption of power is not a big problem, but computer-based systems can be disabled or even damaged by a sudden interruption of power.

IT systems require a separate backup power source to carry loads until the generator achieves full power. An uninterruptible power supply (UPS) uses battery power to bridge this gap and also condition the power to prevent power surges and spikes from getting to sensitive equipment.

UPS systems vary widely in capacity and the way in which they store energy. Small, freestanding UPS units are common in offices. In data centers, UPS units are often mounted in the same racks as the servers they power. And there are also very large UPS units that power huge loads for extended periods. (At one mission critical facility I toured, the battery room was 20′ x 30′ and filled with batteries stacked 5′ high!)

Most conventional UPS systems use lead acid batteries similar to those found in automobiles to store electricity. While normal building power is on, the UPS uses it to keep the batteries charged, and anti-surge circuitry acts as a buffer between sensitive equipment and potential power spikes from the outside. Just like generators, lead acid batteries do not last forever and will need regular maintenance and replacement as well as regular full load testing for the whole UPS unit. Lead acid batteries also create explosive gases when they are charging, which is another maintenance and safety aspect to manage.

Today, there are some innovative alternatives to conventional UPS systems. One new system uses two innovative approaches: a spinning flywheel and a tank of compressed air. [For more on flywheel technology, see “Flywheel Technology For Energy Storage And Backup.“] When normal power is available, the unit applies small amounts of electricity to keep the flywheel spinning. Because the flywheel “floats” in a magnetic field inside a sealed enclosure and the generator unit is turned off, there is almost no friction, so very little power is used to keep it moving at peak speed. When power fails, the unit activates the generator portion of the unit, and it starts creating electricity. The flywheel has limited capacity, but it can carry the load until the compressed air starts working.

The compressed air is then released into a turbine connected to a generator, which supplies power for a much longer period than the flywheel could. As the air exits the turbine, it is directed at the equipment it is powering, helping to keep it cool. This kind of system claims low maintenance and a 20-year lifespan, far more than battery-based systems.

No matter how you power your facility technologies, check your generator circuit panel schedules and test your UPS and generators. Then you’ll have the backup power your technologies need to keep performing even if the lights go out. 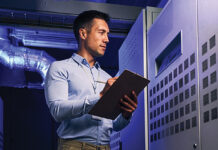 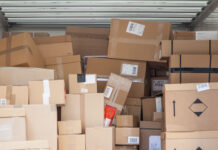 Why Package Management Needs To Evolve 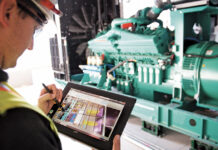