All is not well in France. Gigantic retro cartoon and video game characters are terrorizing the urban landscape, and employees are spending thousands of hours planning their next visual assault.

No, this isn’t about economic matters or even insider trading. It’s a friendly little Post-it® note war between various business entities situated across the street from each other.

From NewsCore (by way of MyFoxLa.com)

The war began a few months ago at UbiSoft, the French video game publisher, where Emilie Cozette, an employee, started to put up representations of Pac-Man and other early icons of the digital age.

The concept spread to La Defense, where staff at a dozen or so firms have created everything from Snoopy to Bart Simpson with Post-Its, and from there to the rest of Paris and France’s main provincial cities.

Now you wouldn’t think this would be a big problem, but some managers think the “creations” have gotten out of hand. Employees are spending time and energy on a mere diversion during a time when many businesses are struggling, yet many participants find the distraction improves morale and even builds teamwork qualities.

Staff members have spent hours producing extravagant designs by sticking vast quantities of Post-It notes to their office windows over the past couple of months in a craze that is sweeping the nation. The latest creation, a huge six storey representation of Asterix and Obelix, appeared on the windows offices of Societe Generale, the bank, in La Defense business district west of Paris in recent weeks.

Fifty employees stuck 9,000 notes of eight different colors on the windows to create what is being touted as the greatest example of Post-It art ever, The (London) Times reported.

The production was a response to a design on the windows of GdF-Suez, the energy giant, in the building opposite.

This involved 3,500 notes to represent Tintin and the rocket he used in the comic book “Destination Moon.”

“The difficult thing was not so much to stick the Post-Its to the windows as to get everyone to agree on the project and then to design the matrix on a computer,” said one of the Gdf-Suez artistes.

He spoke to The (London) Times using his nickname, Fanfan, out of fear that managers would take disciplinary action against him if they discovered his true identity.

“The atmosphere is quite hostile and our bosses would probably like us to stop, although at the same time they are reluctant to order us to take the works down.”

The rules are that you can use only whole Post-Its – no cutting the edges to suit your design – and that you cannot write on them or color them in. 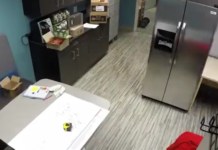 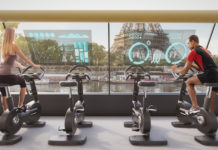 Friday Funny: A Workout-Powered Cruise Of The Seine River