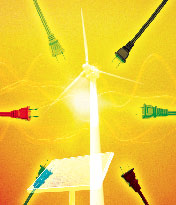 Fueled by the widespread integration of electronics in office spaces, electrical consumption is on the rise across the boards in the built environment. And if nothing is done to change existing patterns, this consumption will increase significantly over the next two decades.

Recognizing this potentially enormous strain on future electrical needs, members of various industries are coming together through the creation of the EMerge Alliance, an open industry association, and are working collectively to develop solutions to harness energy more efficiently and reduce the reliance on fossil fuels for power generation.

From AC To DC

The Alliance’s first major component to its strategic plan has been to develop direct current (DC) into a viable, readily adoptable power source in commercial buildings. The group is doing this through an advocacy campaign that includes written standards for vendors. This effort will allow manufacturers to create products that facility managers (fms) and commercial building owners can begin to consider as components compatible with DC infrastructure within their facilities.

For the uninitiated, alternative current (AC) is the dominant power current used in both residential and commercial buildings and has been for over 100 years. In terms of how it works, when electricity is traveling through AC systems, it will periodically change or alternate direction, whereas DC goes in one directional flow. But it is for this very reason—how it travels—that DC is the more energy efficient option.

The War Of The Currents

To understand how AC became the dominant power voltage one has to look no further than “The War of Currents,” which pitted Thomas Edison advocating for DC against George Westinghouse and Nikola Tesla for AC in the 1880s. After a flamboyant public relations campaign by both partices, AC eventually won out, and it has stayed the dominant current for buildings ever since.

However, ideas have a way of coming back into fashion. And with the creation of microwaves, cell phones, and other electronic products, DC has found a place at the table once again. Although most people are not aware DC is powering their appliances and handheld devices, the question remains, can DC be adopted on a much larger scale for commercial uses?

“Eighty percent of the energy used in a modern, commercial office building goes through a DC stage,” states Brian Patterson, EMerge Alliance chairman. “We just don’t recognize it, because we keep shoving AC into the end of the box.”

Patterson explains that the alliance isn’t against AC per say; it is really about the practicality of DC. “We are not saying you have to be DC, but being that you have to go through DC, it is a better fundamental platform to premise everything.”

The Alliance wants to showcase DC’s efficiency, which it feels is an untapped source of power in commercial spaces. “We are trying to get buildings over to a much more flexible infrastructure of power, which can more easily facilitate the coupling of renewable energy, which allows for more flexible heat and power, helps with consolidation and IT, as well as other functionality like lighting,” explains Patterson. “We are in an age where flexibility of the power structure is going to become more and more important—not only the types of devices, the sources of power too.”

Moving over to DC will help to capitalize on the Alliance’s major strategic goal: the evolution of zero net energy (ZNE) buildings. By making DC much more accessible, companies will not only be able to tap into on-site solar and wind energy (eventually), but also be able to house battery supplies from these renewable sources, build microgrids at individual facilities, and autonomously power their buildings on-site (as opposed to pulling electricity from the national grid).

According to Wikipedia, ZNE is defined as “a building’s use with zero net energy consumption and zero carbon emissions annually. ZNE buildings can be used autonomously from the energy grid supply—energy can be harvested on-site usually in combination with energy producing technologies like solar and wind while reducing the overall use of energy with extremely efficient HVAC and lighting technologies. The zero energy design principle is becoming more practical in adopting due to the increasing costs of traditional fossil fuels and their negative impact on the planet’s climate and ecological balance.”

ZNE is a concept that has been around for a number of years, but it is really starting to gain more traction as photovoltaic (PV) and wind energy mature and technologies to store battery power from these forms of renewables are being further developed. In particular, PV technology is being used in projects great and small. While some may think the return on investment is too long (thus making it cost prohibitive), it is getting support at the enterprise level as big companies begin to seek alternative strategies forever increasing energy consumption.

Regarding investments in renewable energy projects, Intel Labs Research Scientist Guy AlLee explains, “The reason why you are seeing this show up first in the commercial space and not in the residential sector, is that it really is business that understands the calculus of trading off a capital expenditure for an operating expenditure. The real reason to move to DC is you get lower operating expenses over a longer time.”

The Obama administration has been keenly interested in renewable energy. According to Wikipedia, “President Barack Obama’s American Recovery and Reinvestment Act of 2009 includes more than $70 billion in direct spending and tax credits for clean energy and associated transportation programs. This policy stimulus combination represents the largest federal commitment in U.S. history for renewable energy, advanced transportation, and energy conservation initiatives. As a result of these new initiatives, many more utilities are expected to strengthen their clean energy programs.”

Undoubtedly, this administration would like to see renewable energy continue to play a big part in establishing the economy and help with reducing emissions and global warming. However, with budgetary and economic issues in a state of flux, there have been hints that future renewable energy projects might be cut. Thus, federal government funding might be expected only for existing projects or for ones already committed.

Still, EMerge does not appear to be slowed by what is happening in Washington, as the Alliance’s work in what it is calling the occupied space (the traditional interior office space) illustrates. “We have released our first standards for the occupied interior space which is largely dominated by lighting, controls, and other apparatus in the occupied space,” explains Patterson.

While EMerge is a relatively new player in the energy market—formed in 2008—it has already developed its aforementioned occupied space DC power distribution standard, brought in almost 80 member companies from a wide breadth of industries, and developed almost 50 DC-compatible registered products.

As of early July 2011, the lab had installed solar panel arrays and was running some DC-powered servers. It was also in the midst of engineering studies for a lighting pilot at the facility. 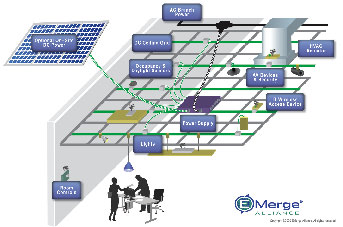 The center is part of Intel Labs’ Energy Systems Research overall strategy for a smart grid with plug and play energy smart homes, offices, buildings and is working with the statewide New Mexico Green Grid Initiative. Intel joined EMerge just this past summer, so the goals of the two organizations appear to be aligned.

These types of projects will keep the momentum going by developing case studies in data centers, lighting applications, and much more.

With the increasing strength of the Alliance and the inclusion of more companies, more initiatives and goals are planned. For example, EMerge is in the process of trying to develop projects like powering electrical cars through companies’ buildings.

“We are working with a vehicle trade association to standardize DC charging vehicles,” says Patterson. “It will be the most economical way to charge vehicles. Most vehicles run on a DC-based system and the batteries are as well. To charge them, you have to take AC power and rectify it. You lose power rectifying from AC to DC power.”

Patterson says the current method can take 12 to 20 hours to charge a car fully. In the future, the goal is to cut down that time substantially, thus making it practical to have company cars recharged on-site at corporate facilities.

AlLee says that beyond looking at lighting and renewable sources, the next component will be energy storage. “There is a lot of work going on with battery technology,” says AlLee. “It is maturing, and there is going to be other competing technologies that show up in the marketplace that really give us the promise of DC microgrids when you get to low cost energy storage.”

Net zero status cannot be met, however, until DC becomes a mainstream power current source first. This could take many years to overcome AC’s dominance. The Alliance acknow-ledges this, and as such, is taking a long-term approach, continuing to write standards throughout the building envelope and gaining more members as it progresses.

“We are looking at a significant continued membership growth and the resources that can be applied to the task of writing standards and developing the ecosystem to support them,” says Patterson. “We believe we have part of the solution that is going to be necessary to achieve ZNE buildings.”

Besides, a piecemeal approach may be the best way to go cautions Patterson. “If the government mandates we get to ZNE, we will get to ZNE, but if it means you have less freedom than you had before, then everybody will fight it,” states Patterson. “We see trying to get to ZNE buildings as a key element; it’s in our national interest, and we believe EMerge can go a long way to making that a reality.”

Parkinson is a freelance writer and former managing editor with Today’s Facility Manager. He is a recurring contributor to the magazine. 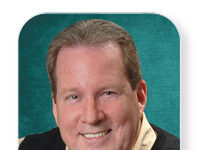 Technology And FM: The Enernet – The Next Frontier?