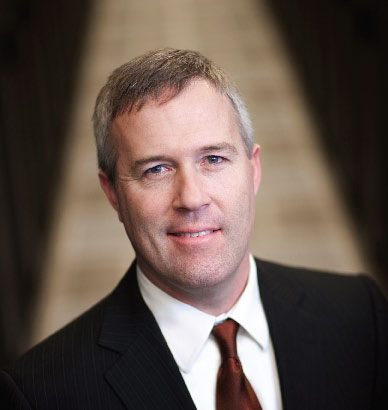 In June 2008, Emerson began construction of a global data center on the campus of the company’s St. Louis, MO headquarters. In addition to showcasing internal technologies and innovations in energy efficient design, the facility would need to support the company’s worldwide manufacturing and engineering operations and serve as the first piece of Emerson’s long-term data center consolidation initiative-merging more than 100 facilities worldwide into four global data centers.

To complete the project, the company enlisted an estimated 150 workers and leveraged the expertise of several design and construction partners throughout the region. At the helm of the project was Todd Finders, winner of Today’s Facility Manager‘s 2011 Facility Executive of the Year honor.

As Emerson’s director of global data center services, Finders headed up the project’s design, construction, and first year of operation. He led the integration of external design teams and in-house IT planning personnel to ensure that aggressive efficiency and sustainability goals could be met without compromising the availability required of a global IT facility.

As a seasoned professional with a background in information technology/IT (his undergraduate degree was in management information systems, and he subsequently earned an MBA from the University of Iowa just before the project began), Finders came up through the ranks at Emerson in the 1990s in the desktop support capacity. His methodical and even keeled demeanor prepared him for additional managerial responsibilities with an IT perspective, which then crossed over into the data center realm. Eventually, he found himself handling more of the facility side of the house through various smaller scale projects.

“As Emerson evaluated its longer term data center strategy, I got involved in that analysis early on,” Finders explains. His involvement in the big picture at a strategic legacy facility made him the top candidate for the position of director of global data center services-a position developed in conjunction with the new construction project.

His non-traditional evolution from a facilities standpoint gave him an interesting perspective. Finders says, “Just growing into that role put me in a position to be part of this project and part of the construction (and ongoing operations) of these data centers.” It also put him in a position to recognize and change cultural attitudes that had hampered progress in the past.

This project was not executed in a conventional way: with facilities on one side and IT as an afterthought or an aside. Instead, “we went into it with the understanding that IT owned the facility, the infrastructure, and the services, so we worked hard to fight through conflicting priorities quickly (which can often cause disconnects and tradeoffs). From the earliest planning stages, we drove the construction and the decisions made from the perspective of its purpose,” Finders clarifies.

In addition to ideologic innovations, Finders brought along a fresh brick and mortar execution approach. Because the project served as the first step in the consolidation of a well established IT network (comprised of more than 100 mission critical facilities around the world), Finders and the team faced various challenges in ensuring it would be sustainable and optimized for high availability.

2011 Facility Executive Of The Year Judges

From the project’s inception, a number of aggressive efficiency goals were established. In order to demonstrate a cost-effective, worthwhile return on investment for these efficiency achievements, new and innovative solutions-some not typically seen in a data center environment-were required.

With this in mind, Emerson’s construction partners and in-house IT personnel team, led by Finders, implemented a variety of energy saving attributes:

“It’s hard not to be proud of the solar panel array,” says Finders, “because it’s such a huge thing that’s just right out there in front; everybody sees it.” Judge David Lenart agrees, and adds, “[It was a] fantastic innovation incorporating solar arrays…[but] what really struck me was the objective to incorporate natural lighting within a data center yet have the structural integrity to withstand a tornado!”

Uptime All The Time

Emerson’s brand promise states that the company “is where technology and engineering come together to create solutions for the benefit of its customers, driven without compromise for a world in action.” Because the facility was designed to support Emerson’s global IT network, maintaining the highest possible levels of availability was a leading long-term goal.

While Finders’ vision for the project was driven by efficiency and scalability, he understood the value of availability and ensured that steps taken to achieve efficiency would not compromise business critical continuity. Judge Neal Angrisano notes, “Accounting for growth and future accommodation in facility design is key to progressive and effective long-term planning and operations.”

Consequently, Finders worked with Emerson’s in-house IT team to ensure a robust, high availability infrastructure was in place to maintain the optimum uptime. This commitment to Emerson’s long-term availability needs enabled the company to exceed its projected goal (99.982% uptime) in the facility’s first year of operation.

Finders adds, “We just came through our annual preventive maintenance period, which was very uneventful. It was a lot of work for my team and our partners, but to our customers, it was a non-event. Then again,” he says with a hint of comic relief, “we want it to be totally boring.”

During the design process, Finders and his team anticipated a total energy savings of approximately 17% as a result of efficiency actions implemented in the facility’s design as well as the IT infrastructure housed within. However, upon completion, this projection proved to be extremely conservative-with actual energy savings expected to exceed 30% over comparable enterprise facilities.

Judge Jennifer Dolin acknowledges, “These were very impressive improvements, especially compared to anticipated goals.” Furthermore, while Emerson set out on the construction of its data center with very specific sustainability goals, a synergy of energy efficient design and long-term ROI became increasingly evident throughout the construction process.

“As the prices of power and energy climb, you’ve got to do something as a business to manage that price pressure,” Finders explains. “So the choices you have are either to reduce your consumption or hope the price goes down.”

After evaluating the costs and benefits of energy efficient strategies implemented, Emerson learned that every step taken toward sustainability was justified directly by the expedited ROI it ultimately would provide.

Since opening the facility, Emerson has been able to begin consolidating from large, legacy facilities in Chicago, Cincinnati, and St. Louis. This has resulted in an estimated 75% reduction in data center floor space, translating to dramatic reductions in power consumption.

The lighting was intended to improve employee efficiency and productivity (“Love the use of natural light in a data facility!” Judge Jim Elledge exclaims), reduce human error, and enhance employee recruitment and retention. The facility also was designed to serve as a dynamic educational tool for all who visit or work in the building.

People who occupy the building recognize the good, solid aesthetics and appreciate the environment created for them. “But investing in the right technology and other aspects of the building to make sure that it’s sufficiently advanced and highly efficient adds to the great work environment for them as well,” Finders notes.

He continues, “The space some of them occupied before was literally a basement. It had a low ceiling, was dark, and there was no daylight. Those people are now living in this brand new data center with all its advantages. In conversation with them, it’s evident right away that they very much appreciate and enjoy the change in the environment.”

And as an educational showcase of Emerson’s products and services, the facility has exceeded expectations across the board. Finders explains, “We’ve had more demand for tours than we expected-both externally and internally. Its popularity puts our team in the spotlight, but it also brings us a source of pride; we’re a sales tool. The effectiveness we have, and the better job we do not only brings value to the business (because we keep their IT systems running), but it impacts the effectiveness of one of our business groups in the market. This gives us another way to feel valued outside of the internal operation. It’s a very cool thing.”

Emerson wanted to ensure the project would represent sustainable best practices, both during and after completion of principal construction. From the project’s inception, the building’s designers meticulously consulted U.S. Green Building Council guidelines for achieving a predetermined LEED certification. Using these guidelines as the foundation, Finders and the team took steps to ensure that sustainable best practices were observed throughout the construction process (in addition to the aforementioned energy saving attributes).

During the site selection process, Emerson optimized a portion of its St. Louis campus by triangulating the facility with existing assets and minimizing the project’s required footprint. During construction, the use of locally procured recycled materials and the diversion of the majority of the project’s waste enabled Emerson to minimize fossil fuels. Nearly 20% of materials used to assemble the building were comprised of post consumer materials.

Through the installation of efficient fixtures and implementation of an environmentally friendly natural drainage system, Emerson conserved water and protected the surrounding grounds from potentially hazardous runoff. And under Finders’ leadership, Emerson was able to meet-and in some cases exceed-all sustainability goals set for the project.

Emerson anticipated the project would achieve LEED Silver certification-becoming the first data center in the region to earn the accreditation. But thanks to additional anticipated innovation credits and savings, the facility was awarded LEED Gold certification in 2010. “What’s more to say? This confirms that the project was successfully completed using a comprehensive approach to sustainability,” says Judge Henning Bloech.

Equipped with energy saving attributes as well as a robust IT infrastructure, the facility is enhanced by internally developed strategies addressing the three most critical constraints faced by data center managers today-power, cooling, and space. Consequently, it was also given a “Beyond Green Award” by the Sustainable Industry Buildings Council in the “Innovative Solution for a Niche Market Application” category. Judge Kevin Borg sums it up saying, “A perfect ending to a great project, Gold and ‘Beyond Green Award’ in the same year.”

Finders’ involvement allowed Emerson’s vision and goals to be effectively translated-from the initial design and planning to provisioning and operations-into an innovative and sustainable facility that effectively supports a mission critical global organization.

This article was based on the nominee’s entry and supplemented by interviews with Finders. To read about past recipients, see the links below. To see the winning entry, visit this link and download the pdf.

Coronavirus Prevention & Safety January 14, 2022
Five lessons on preventing the spread of COVID-19 in the workplace that facility managers can learn from production studios.