By Chad A. Safran
Published in the November 2011 issue of Facility Executive

A Chat With Jimmie Manning, Vice President of Purchasing and Property Management, Diversicare

What notable changes have occurred in facility management during your time in the profession?
An online purchasing system specifically developed for healthcare facilities called DSSI has greatly improved the purchasing capability and control at our facilities. A preventive maintenance system called TELS has been developed. It assists our maintenance supervisors in completing all their tasks, both preventive and those required by regulations. Every nursing home is now fully protected with a fire sprinkler system. There are now numerous online systems covering such areas as employee training, medical records, preventive maintenance, and purchasing. All homes are now required to have a backup generator for electrical emergencies.

What challenges have these changes presented?
Older facilities often require very difficult retrofitting in order to incorporate these changes. Many of them demand extensive training of both corporate and facility staff in order for the systems capabilities to be maximized.

What makes operating a healthcare facility different from other facilities you have managed?
We provide around the clock care for many of our nation’s most vulnerable citizens—our seniors and others with special needs. When something breaks down you must address it immediately, because it affects the quality of life and potential well being for many people. What are the day to day challenges presented in operating a nursing home? Challenges include natural disasters, staffing levels, failed equipment, and medical emergencies. We must meet all of these challenges while operating under a governmental reimbursement system that can change drastically almost overnight.

When it opened in 1972, the Canterbury Healthcare Center functioned as a facility to provide quality care to the residents of Phenix City, AL, and the surrounding communities. For nearly four decades, it has been a location focused on long-term care, special needs services, and short-term rehabilitation for the elderly. And even though the facility had been well maintained over that time, it had become dated, worn, and operationally challenging.

The greatest majority of nursing homes in the United States are more than 30 years old. Many of them need to be completely renovated or replaced if they are to continue providing a quality environment for the residents and staff. This is why Canterbury’s parent company, Diversicare, entered into a multi-year program to modernize and improve all its locations.

Canterbury was the 15th of Diversicare’s nursing homes to be renovated. However, there were other reasons for Canterbury to receive a facelift.

“We wanted to enhance the services being offered as well as ensure the long-term financial viability of the facility,” says Jimmie Manning, vice president of purchasing and property management at Diversicare. “Our major goal has always been, and must always be, to provide quality care for our residents. We strive to provide every advantage we possibly can to our facility staff, whether that’s quality products, modern equipment, online systems, or a safe and appealing environment.”

However, renovating a care facility is not a simple task. During the six month development window, Manning and his team performed an extensive review of the structure to determine the options, but any ideas and subsequent changes had to adhere strictly to national codes (such as National Fire Protection Association 101 “Life Safety Codes”) and state level codes. Says Manning, “When you do a full renovation, the state makes you bring up everything to current code, which can be very costly.”

Additionally, state regulators had to approve a project phasing in plan for the construction prior to the first shovel going into the ground. Once the renovation began in May 2009, construction areas had to be sealed off and/or temporarily evacuated while work was being completed in that space. This proved to be a bit of an obstacle for Manning, who had to work around 132 residents, 165 employees (145 full time and 20 part time), and four doctors.

The biggest challenge of every project of this kind is keeping the residents safe and the facility operating while under construction,” he says. “It is very important that you engage a construction company that understands the environment in which it will be working.

“We also had to make sure the staff had a good understanding of how stressful it could get during construction. We took every step possible to minimize the effect on our residents, but the heroes of this process were the facility staff who were most affected and yet continued to provide quality care to their residents.”

While the number of beds would remain the same (137), Canterbury’s renovation was going to produce larger private rooms and public areas, a new therapy gym, a redesigned main dining room, and an Alzheimer’s Unit with separate courtyard as well as its own dayroom and dining area, amongst the many improvements. “The main thing we wanted to accomplish was to ensure the completed project had a positive effect on the lives of the residents and staff,” says Manning.

The renovation consisted of multiple phases, beginning with the conversion of the assisted living wing into a skilled nursing beds area. Next were the physical therapy gym, kitchen, and training bathroom.

Each area took anywhere from one to three months to complete, but some areas were worked on at the same time in order to speed up the rebuilding process. The size of each phase varied, running from 3,300 to 13,800 square feet.

“The prioritizing of the project’s overall scope was crucial to ensure we received the maximum benefit for our residents from the funding available,” says Manning.

Room With A View

Originally, the main dining room had no windows, but Manning wanted to enhance the residents’ dining experience significantly. “If you spend any time at all at a healthcare facility, you will realize that mealtime is a very important part of their day,” says Manning.

So an interior wall, which separated the dining room from a corridor that ran along an exterior wall with numerous windows, was removed. As a result, residents are now able to view the courtyard while they eat, improving a vital part of living at Canterbury.

There were other improvements as well. Meals are chef prepared and served restaurant style. Combined with new chairs, tables, centerpieces, and piped in music, the new dining atmosphere has become a positive aspect for residents. 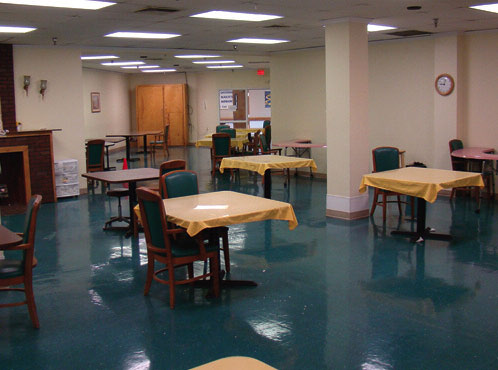 The dining room was just one of the many areas that received an overhaul. A vacated assisted living wing was converted to a short-term rehab unit. Core services (such as therapy and dining) were moved into a central location, improving access for everyone. There is a new Activities of Daily Living (ADL) kitchen, which is also called a training kitchen and is used to help residents prepare to return home. The facility now has wireless capability too. Along with new a training bathroom, Canterbury is better equipped to meet the needs and serve the Phenix City community.

“We offer a comfortable environment complete with electric beds, flat screen televisions, personal seating, and many other amenities for all residents,” says Manning, who along with his Director of Property Management Rory L. Jones, oversaw the design, development, and budget of the project in addition to monitoring the construction from start to finish. “We have made an effort to enhance our facility’s environment to give a more home like feel.”

While some of the improvements can be seen immediately, other subtler touches have made a big impact:

Residents can feel safer now too. A new exterior exit security system was installed to ensure safety at the facility. In order to control who enters the facility after hours, the new system requires all magnetically locking remote doors to require an access code.

Not only has the living experience improved, but Canterbury also made changes that help the bottom line. All exterior windows now have low-e glass and are double insulated. Energy saving equipment and lighting was installed. A new white Duro-Last roof system was put in place to reduce cooling costs.

Prior to the renovation, Canterbury’s existing fixtures/faucets often leaked. However, that’s no longer the case because of the installation of 104 new commodes and sink/faucets (which need less water to flush) and 28 new showers. Four new large spas were installed too.

The plumbing improvements ended up using the biggest portion of the renovation budget due to the large amount of concrete removal for sewer lines. But the investment proved to be worthwhile.

“By replacing all sinks and commodes with more efficient units throughout the facility, we reduced our water consumption,” says Manning.

Within 21 days of the project’s completion, Canterbury went from 85% occupancy to 100% and received hugely positive feedback. While some residents told Manning it was about time, others thanked him for making the investment in the community and expressed how happy their families were with the new spaces.

One woman offered up Manning’s favorite compliment: “I told my husband if I had to go into a home to bring me here.”

This article was based on an interview with Manning. TFM was saddened to learn that Jimmie Manning passed away in November 2011. Inquiries about this renovation story can be directed to the Canterbury facility.