Allsteel Inc., designer and manufacturer of workplace furnishings, has received ISO 50001 Energy Management System certification. The Muscatine, IA company is the first furniture manufacturer in the world to be certified to this global energy management standard, and the third company in the U.S. to receive the rating.

In addition to this recent certification, Allsteel has earned Superior Energy Performance (SEP) Gold certification, achieving more than 10% in energy reductions since its 2008 energy baseline. The SEP program is guided by the U.S. Council for Energy-Efficient Manufacturing. In seeking the certifications, Allsteel was part of a U.S. Department of Energy Demo Program. An accredited registrar granted both certifications.

According to Keri Luly, Allsteel’s manager of sustainability programs, the company’s 650,000 square foot manufacturing facility qualified for these latest certifications by committing to incorporate energy saving systems that will yield a 25% reduction in energy intensity over 10 years.

To this end, several initiatives have already been completed, such as the installation of a 21,200 kWh rooftop solar array. Other energy efficiency improvements contributing to the certifications include annual average reductions over the past two years on its air compressor system by 2,359,837 kWh and on its VFD dust collection system by 696,428.571 kWh.

“We knew when we accepted the invitation from the Department of Energy and the U.S. Council for Energy-Efficient Manufacturing to participate in their pilot leadership program that it would be a challenge to meet their requirements,” said Luly. “But Allsteel once again has proven it is a leader both domestically and on the global front.” 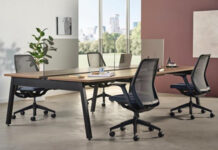