When Posty Cards, Inc., a designer, manufacturer, and national distributor of personalized corporate greeting cards, was recognized with LEED Platinum certification in April 2012, it was a proud day for the company. Located in Kansas City, MO, the 64 year old business had executed a complete renovation of its existing facility along with an expansion that doubled its square footage. Led by company president, Erick Jessee, the family owned business achieved this level of sustainability through a systematic approach during design and construction.

The project was not initially driven by the desire to achieve LEED Platinum or any green certification at all. Rather, the need for space in both manufacturing and office areas initially prompted Posty Cards leadership to expand its facility. Says Jessee, “Originally, it was purely about square footage. We had reached a point with the original facility where space constraints were limiting our ability to hire people and add equipment.” The company employs about 40 people, and during the second half of each year that number begins to ramp up to 50 for the holiday season.

In 2009, Jessee initiated the expansion, and he was actively involved from start to finish. Working with the architect, engineers, and other professionals hired for the project, he evaluated and decided upon the features and systems that would be installed. In addition to the company’s manufacturing plant, the building also had to house offices, a phone order center, and a design department. Says Jessee, “Every square inch of the existing spaces were affected by the project. We wanted the entire facility to feel like new.”

Early into the planning process, Jessee and the other company owners realized they could also seize the opportunity to increase the sustainability of their operations. Jessee says, “We were investing significantly in the building project, and it was important that we not only create the square footage we needed but also an iconic project that would help set us apart from our competitors and become part of our brand image.”

The aim of LEED certification was a natural progression for Posty Cards, because the company was already mindful of its environmental impact. All electricity used at the facility is offset by renewable energy credits. Meanwhile, all the greeting card and calendar products are printed with soy ink, and many use recycled or FSC certified paper.

Since the company expected this to be a “once in a generation” building project, the planning process considered all facility areas and operations. “This was a huge opportunity for us to put everything up in the air and redo it all. As a result, the way the facility is organized is completely new,” says Jessee. “It gave us the opportunity to rethink how our manufacturing line was structured. The way we handle the flow of production from raw material to fulfilling the customized product out the door is much more efficient.”

Meanwhile, office areas were gutted and renovated and now feature an abundance of natural daylight, updated furniture (though the company purchased pre-owned), and a new fitness facility and showers. “The changes have been huge in terms of the day to day work experience,” says Jessee. “We also included an event space where all employees can gather; we didn’t have that before. We hold internal events there, but we’ve also hosted outside groups interested in small business or sustainability. That presents an opportunity for us to educate others about the building’s sustainable features as well as the bigger picture issues that they help address.”

The existing Posty Cards facility was built in 1987 (with an addition in 1989), so updating items to meet the current building codes was also an important aspect. This included electrical, plumbing, and fire suppression systems.

Aiming High, On A Budget

Key to the success of the project were the financing mechanisms Posty Cards took advantage of to bring the project to fruition, in one phase rather than two. A combination of local, state, and federal tax credits and grants enabled the company to pursue its aesthetic, sustainable, and functional goals for its facility.

Jessee notes that the agencies he contacted were very helpful in providing information on what financing mechanisms were available. “To others handling a construction project, I would recommend leveraging all the resources available to them,” he says. “There is initial research required to find out who the relevant entities are, but once you contact them, they should be more than happy to help.”

With financing in order, Jessee and his project team took a methodical approach to planning the building. Budget, function, and the LEED pursuit made up the framework, and for each decision the team cross referenced its design criteria, the LEED point system, and the costs involved.

“Each time we needed to make a major decision we considered the goals and costs, but we looked equally at LEED points,” explains Jessee. “We’d ask ourselves, ‘How many points will this decision get us? And what is the cost for those points?’ The experience of Turner Special Projects (our construction manager) with LEED projects was very helpful. This group advised us on what points would be easier to document and ultimately earn.”

He continues, “This design approach was incredibly successful, because throughout the process we were able to tally the points to see where we stood relative to our LEED goals.”

The initial LEED goal was for the building to achieve Gold level certification. “We thought that would be a good challenge for us,” says Jessee, “but once we had moved through the design process and tallied the points we expected to earn we were only three points away from the Platinum level. So we made an additional investment in the building to get us over that threshold.”

Two items were key in propelling the facility to LEED Platinum—expanding the solar PV array and adding a measurement and verification (M&V) tool to track building system performance. Initially set to supply 7% of the facility’s electricity demand, the PV capability was increased to about 11% (45 kilowatts).

Meanwhile, the M&V tool was a completely new addition to the plan, and soon after the project reached substantial completion Jessee discovered its value. Areas of the heating and cooling systems were not working as efficiently as their specifications had indicated, and using the data provided by the M&V system (which can report on individual pieces of equipment), it was discovered where the problem existed.

The M&V system measures the efficiency of HVAC, lighting, and water usage. “Without this tool, I would not know if the equipment was running according to spec,” says Jessee.

“For facility managers, as the focus expands beyond upfront construction costs to overall operating costs over time, an M&V becomes an essential item,” he continues. “Both the architect and our engineering design firm have said for future projects they are recommending their clients invest in this type of system.”

In terms of energy use, the building is currently performing according to or better than the design model. This is due in part to information provided by the M&V system. Jessee explains, “We doubled our space but expected to use only 5% more energy than before the expansion. When the project was first complete, we were using more energy than had been modeled. But since tweaking the systems based on the M&V feedback, we’ve been operating at that level or better.”

Meanwhile, some aspects of the facility were not submitted for LEED point consideration; natural daylighting was one of those. The building features many windows, and the team anticipated the project would earn daylighting points. However, Jessee explains that hiring an engineer to document this was something they chose not to pursue because the project had accumulated enough points to reach LEED Platinum.

While the design process ultimately served to deliver Posty Cards a LEED Platinum building, the project was not without its detours. The initial plan for a heating and cooling system was to use a ground source geothermal energy system. “We have really deep bedrock here in the Midwest,” says Jessee, “and that is an ideal environment for geothermal. We intended to drill 40 wells at 400′ deep under our parking lot for the system. Typically in this area you hit bedrock 10′ or 20′ down, and that supports the well. We drilled 85′ and never hit bedrock, just alluvial sand. Our geologist told us this area was a riverbed for the Missouri River thousands of years ago.”

The team needed to identify another heating and cooling approach, and it chose to specify variable refrigerant volume HVAC system. “It’s not as efficient as geothermal, but it does approach that level,” says Jessee. This system, the first of its kind installed in Kansas City, MO, is based on the principle that there are different heating and cooling loads depending on the needs of the space. It uses constant incoming data to determine if an area should be heated or cooled.

A strategy that has performed well is rainwater reclamation. An 8,300 gallon tank collects the rainwater from a large area of the roof, and that water is then used for irrigation and toilet flushing. In 2011, the company did not have to use any supplemental water for those purposes, since the tank collected enough. However, Jessee says this year is different due to lack of rain, and the company has had to use some municipal water.

Ready For The Next Era

In addition to the sustainable aspects of this project, Jessee notes the impact on employees. “Our building was transformed from a standard industrial building with minimal windows to a facility that enjoys natural light throughout. It’s a huge change for our employees, and I’m very pleased with that,” he says.

A courtyard, where the rainwater tank is located, is another way the project introduced sustainability while also creating spaces foroccupants to enjoy. “That area provides several benefits,” explains Jessee. “It lets in a lot of natural light, but it also enhances the work environment, providing views and a visual connection across the expanded facility.”

Adds Jessee, “Posty Cards has always been focused on sustainability, so this project gave us the opportunity to expand on that. We are now making our products in a green building, so our entire operation is aligned with the sustainable goals of the company.”

This article was based on an interview with Jessee of Posty Cards, Inc. 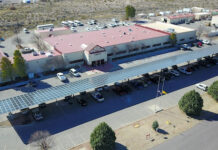