Managing all the moving parts of a construction project is a demanding task, and it’s one most facility professionals encounter throughout their careers. When unexpected events come into play, a project can become even more complex, and that is what occurred as the U.S. Department of Veterans Affairs (VA) was carrying out a master plan project in Biloxi, MS. In May 2004, the VA Secretary had approved a national plan known as CARES (Capital Asset Realignment for Enhanced Services), and one of the first projects was to consolidate healthcare services from the Gulfport, MS site into the nearby Biloxi, MS site.

Gary Butterfield, CARES project coordinator for the VA Gulf Coast Veterans Health Care System (GCVHCS), explains, “The consolidation would create efficiencies by reducing duplication and provide a single location for veterans to receive care. Plans to consolidate the medical centers was underway when Hurricane Katrina made landfall in Gulfport in August 2005, demolishing the medical center at Gulfport.”

A Chat With Gary Butterfield

With this and other construction projects you’ve worked on in mind, what issues are facility managers facing today? Sometimes facility managers limit themselves to constructing and maintaining buildings. Even though the end users play a key role with the architects during design, the role of facility managers should not be underestimated, especially in specialty buildings like medical centers.

Because they have experience working with all departments, facility managers typically have a unique view of how a building will work as a whole, while users tend to focus on individual departments. Because of that, facility managers should not shortchange their organization by being less than full partners in all phases of major construction projects.

The initial decision to renovate and add to the existing Biloxi campus was motivated by the need to provide enhanced medical care to more than 60,000 veterans along the Alabama and Mississippi Gulf Coast and the Florida Panhandle. When Katrina hit, this effort became even more crucial.

Says Butterfield, “Overnight, the Gulfport campus operations were moved to the Biloxi site. By doubling and tripling up employees in administrative space and hastily adding modular buildings, this campus absorbed Gulfport operations while a more permanent solution was put into place.”

That long-term solution was the master plan already set in motion by the CARES. It was a program comprised of a clinical addition (150,000 square feet); a community living center (105,000 square feet); a mental health facility (98,000 square feet); and a blind rehabilitation center (63,000 square feet). Also part of the plan were support spaces, including a utility plant addition, a laundry/dietetics facility, and a 975 space parking garage.

A week after Hurricane Katrina, architectural firm Leo A Daly conducted a site investigation and was hired to begin work in November 2005. Heading up the design team is John Andrews, VP, senior project manager at Leo A Daly, and he recalls the challenges inherent in working in an area devastated by a natural disaster. “Basic issues such as finding transportation and lodging had to be addressed. And before we could begin any work, we had to conduct an environmental assessment and hazardous materials abatement,” he explains.

The clinical addition, completed in May 2012, is a centerpiece of the project. This four story building has expanded and improved medical care for veterans by streamlining access to the services they need regularly. Says Butterfield, “The building allowed the VA to co-locate primary care, specialty clinics, and ambulatory surgery within the same building. Previously, accessing this care required trips to several buildings.”

Completed in 2011 were the community living center, the mental health center, and the blind rehabilitation center. Each of these provides targeted services.

The community living center is a long-term care facility designed to represent small residential households within neighborhoods. Each residence is named after a U.S. river (e.g. Mississippi, Rio Grande) and features distinct colors to provide a sense of place. Features include shops, a chapel, offices and exam rooms, dental and podiatry rooms, a beauty/barber shop, and a deck and coffee bar.

Prior to this project, mental health services for area veterans were located at Gulfport, so adding that facility to the Biloxi campus means veterans can access medical, surgical, and mental health care on one campus.

The blind rehabilitation center provides short-term care aimed at helping veterans who have lost their sight to function independently. Featuring 26 private bedrooms, many designed like studio apartments, this is a new service to veterans on the Gulf Coast that was specifically called for in the CARES plan.

The loss of the Gulfport campus forced the project team to expedite construction, with each new building treated as a separate project. Five major facilities were under construction simultaneously for a two year period. Each project had a different general contractor, and at times contractors had to cross into the sites of others to complete their projects.

Butterfield notes that throughout construction, facilities never shut down or decreased operations. “Patients were always put first, not just during building design but during the construction period as well,” he says. “The solution to every challenge started with asking how the situation affected our veteran patients immediately and in the long-term.”

Two other overarching issues were structural safety and historical integrity. With the destruction of Hurricane Katrina in plain view and the fact that this is a government facility, protection against natural and man-made disasters was top of mind for the VA campus.

To address this, several of the measures Leo A Daly included in its designs were aimed at structural integrity. Roofing, door, and window systems were designed to comply with Miami-Dade hurricane requirements. Products specified were required to pass various tests, such as impact and pressure-load testing for high-velocity hurricane zones.

Additionally, the structural engineers designed the mission critical facilities to meet blast resistance and progressive collapse criteria. This is one of the first VA campuses to be designed for progressive collapse—if an event takes down a column, the load is transferred to other columns, thereby protecting occupants.

“One major trend is an emphasis on safety and security—this applies not only to VA medical projects, but government projects such as office buildings, community centers, data centers, public transportation facilities, and GSA museums and monuments,” says Andrews.

Meanwhile, from an aesthetics standpoint, the project team worked within guidelines from the state’s Historic Preservation Office to ensure the new facilities did not distract from the historic character of the campus. Designed in the 1930s in the Late Southern Colonial Revival Style by VA architects, the campus was formally listed on the National Register of Historic Places in 2002. The new buildings reflect that style.

Butterfield comments, “A unique aspect of this project is that we found ourselves in different phases of the project simultaneously. It was normal to be creating space plans for one building, designing another building, constructing a different building, and activating a newly completed building all at the same time.”

A challenge after construction was the activation of the new facilities. Over a 10 month period, the four largest buildings were completed and turned over to the VA. Even though activation planning had started well in advance, equipping the space, moving materials, and communicating was a major project. This was accomplished on weekends and during off-hours without affecting patient care.

Work on the laundry/dietetics building is currently underway, along with landscaping and other site improvements. Meanwhile, the VA has put the new facilities into use as they have been completed. “Each new building has been tremendous,” Butterfield says. “The clinical addition has not only located our key medical and surgical services into a single building, it has also provided space for expansion in our fastest growing clinics.”

He continues, “The building opened in phases with primary care opening first. Because some of the space was still under construction, the route from the old building to the new building was through a temporary corridor. On the first day in the new clinic, it was a delight to stand at the end of that corridor and watch the faces of veterans as they entered the new space for the first time. There were expressions of amazement as they saw the much larger, modern clinic spaces that had been created to serve their needs.”

With the majority of the Biloxi master plan complete and in operation, changes to the facilities have been minimal, according to Butterfield. “We were careful in design to create as much flexibility as possible to accommodate future changes in healthcare delivery,” he says. “We look forward to serving veterans in this building for many years.”

This article was based on interviews with Butterfield and the Leo A Daly project team. 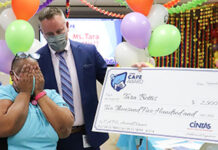 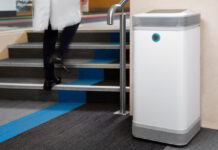 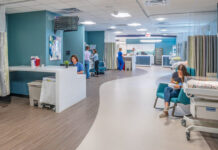 Healthcare Worker Wellness And The Surprising Impact Of Flooring