This Web exclusive was contributed by JLG, a McConnellsburg, PA-based manufacturer of lift equipment used in all types of industries.

At first blush, it sounds like a simple project: paint a champagne colored stripe on the wall of a movie theater lobby. But as Jesse Truesdale will tell you, the devil is in the details. The owner of Cobb Theatres in Leesburg, VA tasked Truesdale with painting a 3” x 280’ ribbon of color 30’ above the ground on the wall of the theater lobby. This area included a large, open stairwell that takes theater patrons from the ground floor entrance to the second floor lobby—a decorative detail moviegoers will see as they stand at the top of the long staircase, face the opposing wall and turn in a complete circle. Truesdale, part owner, along with her husband Ben, of TrueBuilt, LLC, set out to make that stripe a reality on the theater wall.

Truesdale likes a good challenge. Her company, a northern Virginia-based general contracting firm that provides construction and preconstruction services, tackles projects that other companies often turn down. “We have a real passion for building, and we look for those projects that present interesting challenges,” she says. “The theater in Leesburg turned out to be such a challenge—one that the JLG compact crawler boom proved instrumental in helping us overcome.”

As she studied the project, Truesdale realized her options were limited. “Leaning a ladder on the two staircase landings would not work, because the scale of the painting and the fact that the paint was being applied to a curved wall required that the painter be able to regularly step away from the wall and check the perspective.”

Scaffolding presented another option—a time-consuming and expensive option, which, like the ladder, would not provide painters with the necessary perspective and would have required the entire staircase be taken out of commission for the length of the project.

Truesdale also considered using equipment to help reach the wall, but the facility’s design is not conducive to moving equipment to the second floor. A small passenger elevator, located in a narrow corridor, and a freight elevator, located in a kitchen that offered little room to maneuver, could not handle heavy, bulky equipment. Removing windows to provide access to the second floor proved to be cost-prohibitive. And so, the search began for a compact piece of aerial equipment that could move up a ramp built on top of the middle portion of the three part staircase and provide access from the second floor, across the stairwell to the wall.

After renting a piece of equipment that appeared promising, Truesdale and her team discovered it was unable to maintain the angle necessary to climb the ramp, moving only 3′ up the structure before getting stuck. As luck would have it, a sales rep from another rental company visited the theater, noted the problem, and proposed the JLG X700AJ compact crawler boom as a solution.

“He had my attention at a critical moment, and after taking a look at the crawler boom, I was willing to give the machine a try,” recalls Truesdale. A week later, the crawler boom was on-site and performing to expectations.

“We were able to secure a battery operated model, which was a requirement, since I had no way of venting fumes to the outside,” she says. “And it made it up the entire ramp without any problems.”

Truesdale admits to being nervous to use the unfamiliar equipment. But, inspired by its ability to climb the stairs, she was optimistic about its performance. In fact, she and her crew quickly learned to use the crawler boom, which enabled painters to stand in the bucket, sketch the stripe in pencil using a 2’ x 2’ grid, and then paint it.

The compact boom measures 39” across and has a horizontal reach of 37’. With a platform capacity of 440 pounds and an elevated height of 69’ 7”, it met the needs of the project.

“We found the crawler boom to be really, really versatile and at the same time, extremely stable,” says Truesdale. “Once you get used to it, which doesn’t take very long, the control panel is very accommodating and easy to use, and the machine itself is quite gentle. We always felt comfortable in it and able to maneuver into whatever position we needed to be in without bumping around or missing the mark. Despite the theater’s limited access, tight corners, and a variety of obstructions, including the bulkhead over the bar area, the crawler boom equipped us to get the job done.”

By the time she completed the project, Truesdale felt confident in her ability to use the crawler boom, which was a good thing, because after the work was completed, the ramp removed, and the boom returned, the theater owner decided to change the color of the stripe from champagne to silver. That meant securing the crawler boom a second time, rebuilding the ramp, and accomplishing in four nights what had taken the team three weeks of night work to complete the first time. “This time we did not have to create the grid, we knew exactly how to construct the ramp, and we could operate the crawler boom with confidence,” says Truesdale.

She also noted that the machine helped them accomplish a second task. “The theater owner asked us to build out a chandelier that hung above the stairwell, slightly lower than the stripe, and consisted of more than 300 glass pieces that needed to be hand tied to the chandelier’s frame. We tied 10 to 15 pieces in an hour’s time, carefully sorting the pieces on the floor, loading them into a box, and sending someone out in the crawler bucket to tie them.

Without the compact crawler boom, Truesdale is unsure how she would have completed this project. The positive experience, although daunting in the beginning, has made her eager to put the machine to use in another project. “From my experience, the crawler’s uses are unlimited,” she says. “I can see the value it would bring to projects in churches, theaters, auditoriums, gymnasiums—really any place that features peculiar or unusual spaces that are difficult to access—as well as more ordinary applications that require aerial work.” 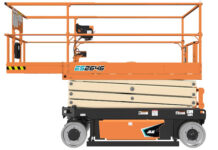 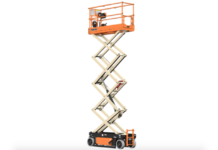 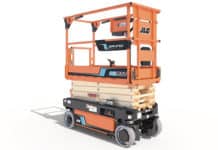