On October 22, 1938—75 years ago this week—something happened in a kitchen in Astoria, Queens that would change the workplace forever. Of course, when Chester Carlson toyed with the idea of solving his own problem—making copies of his intricate drawings and specifications—it would have been difficult for him to imagine how essential the modern photocopier would become in such a short period of time.

With his degree in physics from the California Institute of Technology, Carlson figured out a way to take static electricity from a handkerchief and apply a combination of light and powder to invent the first dry-copy method of photocopying. The result of his first successful photocopying experiment is pictured above.

Carlson’s “electrophotography” method “was based on two natural phenomena: that materials of opposite electrical charges attract, and that some materials become better conductors of electricity when exposed to light.” Carlson’s six-step electrophotography process used this concept to transfer an image from one surface to another. (Source: Xerox Corporation.)

In 1947, Carlson brought his patented dry-copy method to Battelle Development Corporation, which then sold it to the Haloid Company (later to be named Xerox Corporation). The rest is history.

There were more breakthrough concepts from Carlson after the photocopier, but sadly, some never saw the light of day. “Carlson spent his life coming up with crazy inventions, including a raincoat with gutters that guides water away from trouser legs and a toothbrush with replaceable bristles,” writes Kelly Dickerson of Business Insider.

For those of you interested in more information about Carlson and the history of photocopying, check out this 25 minute YouTube video from The Secret Life of Machines television series, featuring Tim Hunkin and Rex Garrod. This program originally aired in 1993 as part of the third and final series, which concentrated on office-related technology. It also introduced an animated set of fictional characters who worked in the offices of the fictional Utopia Services company. 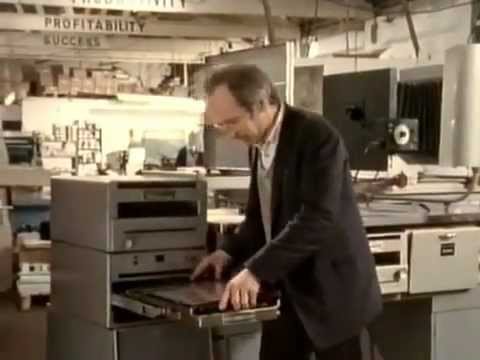