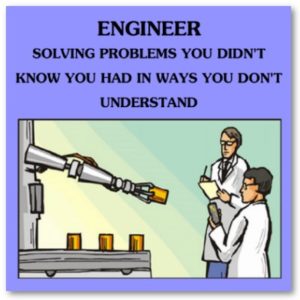 Back in August 2012, I posted a collection of engineering jokes from the Internet. While the original jokes and stories were mildly amusing, the collection of comments at the end of the post—which is still one of FacilityBlog’s most popular and most commented posts to date—was really worth reading. You can enjoy the collection and comments here, or you can check out this additional list of anecdotes, which was also taken from the comments section on another site.

A group of NASA mechanical engineers were brainstorming how they might overcome the various thermal problems involved in sending a manned probe to the sun.

An electrical engineer overheard the discussion and offered the following suggestion: Why don’t you just go at night?

Here is a positive story that should bring a chuckle!

The value of an engineer

There was an engineer who had an exceptional gift for fixing all things mechanical. After serving his company loyally for over 30 years, he retired. Several years later the company contacted him regarding a seemingly impossible problem it was having with one of its multimillion-dollar machines. He spent a day studying the huge machine. At the end of the day, he marked a small “x” in chalk on a particular component of the machine and proudly stated, “This is where your problem is.” The part was replaced and the machine worked perfectly again. The company received a bill for $50,000 from the engineer for his service. They demanded an itemized accounting of his charges. The engineer responded with the following: “Chalk: $1. Knowing where to put it: $49,999.”

Progression of engineering education: a good planner needs to know at least a little bit about a great variety of topics, and engineers often succeed by specializing, so we planners like to say that over time, planners learn less and less about more and more until eventually they know nothing about everything. Engineers learn more and more about less and less until they eventually know everything about nothing.

And another from the same person (Planner12):

A man is flying in a hot air balloon and realizes he is lost. He reduces height and spots a man down below. He lowers the balloon further and shouts: “Excuse me, can you help me? I promised my friend I would meet him half an hour ago, but I don’t know where I am.”

The man below says: “Yes. You are in a hot air balloon, hovering approximately 30 feet above this field.”

“You must be an engineer,” says the balloonist.

“Well,” says the balloonist, “everything you have told me is technically correct, but I have no idea what to make of your information.

“The man below says, “You must be a planner.”

“I am,” replies the balloonist, “but how did you know?”

“Well,” says the man, “you don’t know where you are, or where you are going, and you have made a promise which you have no idea how to keep. The fact is you are in the exact same position you were in before we met, but now it is somehow my fault.”

There once was a young engineer, who having worked for several years, decided that he and his family should have a weekend getaway place. He searched the surrounding country, and found a lovely spot with frontage on a small river. They built a cabin, and began spending time there every chance they got. The kids loved it, and friends came for the quiet and fishing.

The engineer, however, wanted something unique for his cabin. He had been an award-winning pole vaulter in college. He therefore built a set of poles with a crosspiece, and a mulched run. He bought a new carbon fiber vaulting pole, new shoes, and was set. He would set off down the run, plant his pole, soar over the crosspiece, and land in the river with a satisfying splash. What a great way to spend a hot afternoon. He tried to teach a few friends to vault, with no success.

He enjoyed his cabin for years, and went out early in the spring one year. It had been a very wet winter, lots of rain afterward. Whent the family arrived, the river was up and flowing at a good clip, with twice the usual current flowing. The engineer was determined to enjoy a few vaults into the water, but his wife didn’t think it was safe. But, he was a good swimmer, and proceeded to have a go at it. His run and jump were flawless, he hit the water in good form, but upon surfacing, he was swept downstream and disappeared. His body was found later that day, tangled in streamside debris. It was a sad end for the engineer, and the family sold the cabin, with no desire to return to the scene of such tragedy.

Our lamented engineer was a Civil Engineer. Had he consulted one of his Electrical Engineer brethren, he would have been warned that “It’s not vaultage that kills you, it’s the current!”

An engineer was crossing a road one day when a frog called out to him and said, “If you kiss me, I’ll turn into a beautiful princess.” He bent over, picked up the frog and put it in his pocket.

The frog spoke up again and said, “If you kiss me and turn me back into a beautiful princess, I will stay with you for one week.”

The engineer took the frog out of his pocket, smiled at it and returned it to the pocket.

The frog then cried out, “If you kiss me and turn me back into a princess, I’ll stay with you and do ANYTHING you want.”

Again the engineer took the frog out, smiled at it and put it back into his pocket.

Finally, the frog asked, “What is the matter? I’ve told you I’m a beautiful princess, that I’ll stay with you for a week and do anything you want. Why won’t you kiss me?”

The engineer said, “Look; I’m an engineer. I don’t have time for a girlfriend, but a talking frog…. that’s cool!!!”

A program manager has been working his team extra hard and as a small reward offers to take two of the engineers out to lunch. Walking to the restaurant they trip over a magic lamp and out pops a genie offering them each one wish. The first engineer asks for a yacht in the Pacific with $1 million on board and 20 beautiful girls. Poof! He is off to his yacht in the Pacific. The second engineer says that sounds great! Ill have the same, except put my yacht in the Caribbean. Poof! He is off to his yacht in the Caribbean. And what is your wish the genie asks the program manager? “I want those two back at work in 30 minutes.” 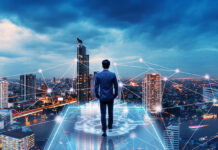 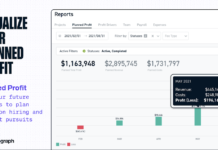 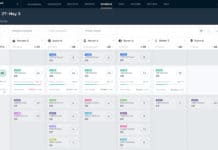