The Grand Canyon Skywalk hovers peacefully over the majestic gorge now as the developer, Grand Canyon Skywalk Development, LLC (GCSD), and Hualapai tribe have reached a settlement after several days of mediation. The resolution ends more than three years of protracted litigation in multiple venues including federal district and appellate courts, the Hualapai Tribal Court, and Hualapai Appeals Court.

The Skywalk, located on the Hualapai Indian Reservation northwest of Kingman, Arizona, was the brainchild of visionary developer, David Jin, who had wanted for decades to develop the West Rim of the Grand Canyon. He brought the idea to the tribe of a transparent, cantilever U-shaped bridge that allowed visitors to gaze straight down 4,000 feet into the heart of the canyon and onto the Colorado River.

Jin’s company built and operated the Skywalk, which opened in 2007, drawing millions of visitors to the west rim of the Grand Canyon, while creating hundreds of jobs for members of the tribe and other tourist companies. Jin died in 2013.

Both the tribe’s and GCSD’s counsel expressed their gratitude for the efforts of the mediators, Judge Jerry Whitehead and John Bickerman, in bringing the parties to a mutually agreeable financial arrangement. The tribe’s lead counsel, Jeffrey Gross, said that the settlement with the management of GCSD would allow the tribe to continue to make the Skywalk a world-class tourist destination.

Tribal chairwoman, Sherry Counts, said, “The Skywalk is an important element in the economic growth and expansion that the Hualapai have enjoyed over the past decade. We are thankful for the contribution David Jin and his company GCSD made to develop this wonderful attraction.”

Yvonne Tang, Jin’s widow, commented, “David cared for the Hualapai people and the natural beauty of the Grand Canyon. He would be so proud that people from all over Asia and the world will continue to appreciate the architectural marvel he created.” 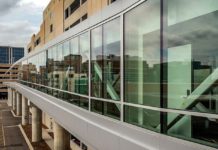