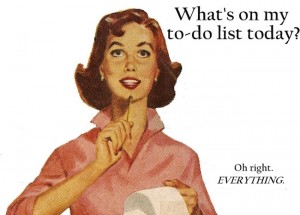 With many moms and dads serving as the sole financial providers in their households, CareerBuilder’s latest research takes a closer look at how genders compare in terms of income, career advancement, and job satisfaction. While salary data indicates that female breadwinners may have a tougher time making ends meet, working moms in general tend to be happier in their jobs. The study also had encouraging findings for stay-at-home moms and dads who are contemplating re-entrance into the corporate world, highlighting work-related skills you acquire as a parent that you can potentially add to your resume. The national survey, which was conducted on behalf of CareerBuilder by Harris Poll between February 10 and March 4, 2014, included 453 working mothers and 375 working fathers with children 18 years old and younger who are living at home with them, and 2,138 hiring managers and human resource professionals across industries and company sizes. Salary and Title by Gender In this year’s study, 31% of working moms and 37% of working dads reported that they are the only breadwinners for their households. While working moms and dads who are sole financial providers were equally likely to work in a management position (20%), more men reported holding a senior management role such as a CEO, CFO, Senior VP, etc. The research also points to a significant disproportion of men and women in other job levels within a company. Working dads who are the sole breadwinners were nearly twice as likely to report holding a professional or technical role – 57% compared to 28% of working moms. Working moms who are the sole breadwinners were twice as likely to report working in an administrative or clerical role – 52% compared to 23% of men. Working dads who are the sole breadwinners also tended to be in a higher earning bracket. They were four times as likely to earn six figures while working moms who are the sole breadwinners were nearly twice as likely to earn less than $35,000. Earn less than $35,000 annually

Maternity and Paternity Leave Both working moms and dads continue to struggle with juggling professional and personal commitments. Twenty-six percent of both genders said they are dissatisfied with their work/life balance. More than one third (34%) of working moms who had a baby in the last three years didn’t take the full maternity leave allotted to them by their companies, up from 30% last year and 26% in 2012. One in five (22%) took one month or less maternity leave while 11% took two weeks or less. Ten percent worked while on maternity leave. More than half (54%) of working dads who welcomed a new baby in the last three years didn’t take the full paternity leave offered by their companies. Half of working dads (49%) took two weeks of paternity leave or less, 21% took five weeks or more while 22% didn’t take any time off. Working dads were twice as likely to work while on leave at 21%. “Financial concerns, demanding roles, and the pressure to stay on top at work may be influencing early returns from maternity or paternity leave,” said Rosemary Haefner, Vice President of Human Resources at CareerBuilder and working mom. “While sentiments around work/life balance are improving with the advent of flexible work arrangements and telecommuting, it is something working moms and dads will continue to chase after.” While working moms earn less than working dads, they tend to be more content in their jobs overall. Seventy-eight percent of working moms reported they are happy in their current roles at work compared to 73% of working dads. Stay-at-Home Parents Returning to Work Being a mom or dad is a full-time job in itself, and the majority of employers (65%) believe that parenting can qualify as relevant experience for the workplace. Aside from patience, the top work-related skills that employers said people acquire as parents include:

“Moms and dads are on a 24-hour shift, seven days a week,” said Haefner. “The skills you develop as a parent to teach, troubleshoot, manage multiple priorities, and arbitrate are very transferable to corporate environments. If you’re a parent getting back into the workforce or first joining it, incorporate what you learned from those work experiences at home.”