The Kroger Co., a retailer headquartered in Cincinnati, OH, has earned ENERGY STAR designation for 500 of its locations.

Several years after its first store was certified with this designation, the company’s Fry’s Marketplace in Phoenix, AZ became its 500th location to earn the ENERGY STAR designation from the U.S. EPA and U.S. DOE.

What are your responsibilities at The Kroger Co.?
As vice president of facility engineering, I oversee a very capable staff that is responsible for all aspects of design, construction, and maintenance, including energy performance and initiatives for all of our retail facilities.

Please describe The Kroger Co.’s facilities. How many locations does the company operate, and what are their profiles?
Kroger, one of the world’s largest retailers, employs more than 375,000 associates who serve customers in 2,640 supermarkets and multi-department stores in 34 states and the District of Columbia. Our stores operate under two dozen local banner names including Kroger, City Market, Dillon’s, Food 4 Less, Fred Meyer, Fry’s, Harris Teeter, Jay C, King Soopers, QFC, Ralphs, and Smith’s.

Recently, Kroger was recognized by the U.S. EPA and U.S. DOE for its 500th store to meet ENERGY STAR qualifications. Would you comment on this most recent certification? What strategies have been employed?

This accomplishment is very exciting for our company and our associates, because it demonstrates our commitment to energy reduction. Energy management remains a vital part of our sustainability work, and we are proud to partner with ENERGY STAR to improve today to protect tomorrow.

Can you share what strategies have made the most impact on energy efficiency efforts overall?

The strategy that is the backbone to our success is our measurement of energy consumption as a function of average temperatures between utility bills. As a key performance indicator this removes the variability associated with weather and enables us to compare progress accurately at an individual store level every time we receive a bill.

When was the company’s first ENERGY STAR store recognized?

The first Kroger store on record is SW-879, located in The Colony, TX. That store was certified in 2010. Our first grocery store to earn the ENERGY STAR “Designed to Earn” designation and then go on and earn full certification was J-998, located in Nora, IN.

In terms of the company’s ENERGY STAR accomplishments overall, can you provide some statistics on how much energy has been saved since you began working with the ENERGY STAR program?

We started with ENERGY STAR in 2010. Our 2010-2013 program resulted in avoided energy usage of approximately 400 million kWh over all our square footage. And, of course we are still going strong with ENERGY STAR as one of our partner programs.

We renewed our focus on energy in 2000 and have since reduced electrical consumption by over 34%, which is equivalent to an annual avoided cost of over $180 million and saves enough energy to operate all the homes in Charlotte, NC for one year.

Can you share a few other sustainability projects you are working on currently? What equipment and strategies are being employed?

Our most recent accomplishment is the design and opening of a high efficiency store located in Lawrence, KS. We partnered with the Rocky Mountain Institute (RMI) to evaluate and install a variety of initiatives that reduced energy consumption in this store by 20% more than our standard store design.

Later this year we will open our first store that is designed with a carbon dioxide transcritical refrigeration system. These use carbon dioxide as a refrigerant, which has little to no global warming when compared to other current commercially available alternatives. [To learn more about this type of system, visit the EPA GreenChill website.]

To learn more about Kroger’s energy and sustainability actions, visit this link.

Ed. Note: In 2012, Kroger received the Award of Excellence as part of the Platts Global Energy Awards. The recognition was for the category of Energy Efficiency Program/Commercial End-User.

Also in 2012, Kroger received the Alliance to Save Energy’s top award, the “Galaxy” Star of Energy Efficiency for its commitment to energy efficiency.

Following standards set by the EPA’s Zero Waste threshold, Kroger is working toward a goal of 90% waste diversion. All stores are involved in the effort, and a 70% diversion rate is expected to be reached by late 2015. In mid-2013, Kroger had a 58% diversion rate across its stores in the U.S. 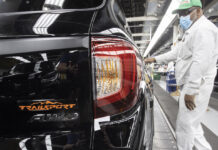