“Green Globe certification gives the market a choice among certification systems and provides competition that helps improve results for users, resulting in more innovation and lower costs over time,” GBI President Jerry Yudelson said. “In this project, the cost savings to the University were on the order of $1.00 per square foot, a significant number for a large building.”

The research was confined to the Papadakis Integrated Sciences Building at Drexel’s West Philadelphia campus, a five-story, 130,000-square-foot laboratory and classroom building that opened in 2011.

A key variance in the two rating systems that was revealed by the study was the cost of using each for the Papadakis building. The breakdown summarized in the university’s records indicates internal (staff time) costs at Drexel for administering both systems were more than $125,000 for LEED versus $9,000 for Green Globes. The report’s summary shows aggregate green building costs (i.e., hard cost premium, soft costs and optional costs for sustainability rating) nearly 15% higher for LEED than for Green Globes. The table below illustrates cost differences between LEED and Green Globes in several key areas of design, management and assessment. 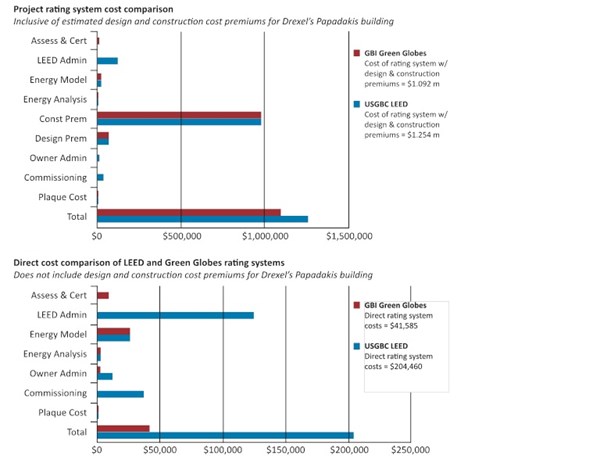 Funding for the study came from the Green Building Initiative. However, Professor Beard conducted the research without any oversight from GBI, using timesheets and other records of administrative costs maintained by the project team and Drexel University.

Environment January 27, 2022
The leading state on the list certified 3.16 square feet of building space per person under LEED in 2021.