Since 2003, through its Facility Executive of the Year (FEY) Award, TFM has recognized an outstanding facility management professional for their work on a renovation or new construction project, along with the value they bring to their organizations on a daily basis. We recently asked past FEY winners to revisit the project for which they were recognized.

This third in the series is from 2010 winner Dave Lenart, director of facilities and materials management at Columbus Regional Hospital in Columbus, IN. Featured in the January 2010 issue, Lenart spearheaded the effort bring the hospital back to operation five months after a flood hit the facility in June 2008.

Planning to fail… No, not a misprint… Just a critical component on exercising our professional knowledge and ability to work through a crisis.

In healthcare, as well as many other industries, it is becoming a significant part of our work: how a facility manages through a disaster, also known as Emergency Preparedness. In 2008, my facility experienced a facility catastrophe. Yes, even in south central Indiana where we see more fields of crops than bodies of water in June, we experienced a flood that would cause us to evacuate 158 patients and close our facility completely for five months.

It was in the following day after the flood hit that I recognized the critical plans that I put in place to react and respond to returning our hospital to the community. You see, some of our most challenging work on a day to day basis can lead to providing the most important resource to our response to a crisis or failure: AS-BUILTS. 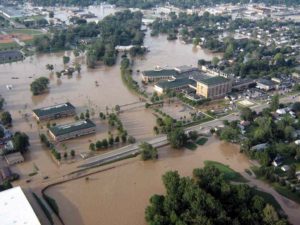 Everyone recognizes the value of good as-builts as a part of daily operations, and we recognize the challenge of getting them routinely updated and keeping them that way over the course of time. But do we do so with the eye of leveraging them in the event of a disaster? They are imperative to our reaction and remediation of such events.

In the flood that occurred to our facility, over 290,000 of our 460,000 square foot area was either completely underwater, or touched by flood waters. All of our major systems were compromised or lost: primary electrical distribution, emergency distribution, chillers, boilers, medical air systems, elevators, air handling units—along with all associated components were all damaged or destroyed by the flood. Seeing your building die before you is a humbling and horrifying experience; and where to begin—a daunting one.

My CEO gave me one directive: Follow the critical path to put the building back together. My path started by pulling my as-builts and one-lines. With the plans I was able to assemble quick information for the executive team by communicating the largest challenges, potential long-lead components and system planning that we needed to put into consideration if in the awful event that this situation would reoccur. With the same plans, I was able to share detail surrounding electrical loads that would need to be reconnected, panels that needed to be reestablished for larger pieces of equipment, and replacement of HVAC systems to areas served outside of the flood area to contractors and designers. 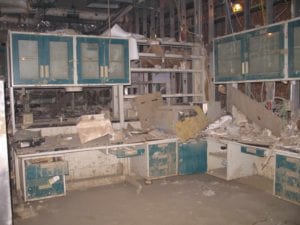 From the discussions with the executive team we started defining our utilities system infrastructure differently to accommodate another such disaster. Of the losses we experienced, the most difficult were the loss of electrical, HVAC, boilers, and vertical transport. In the time restraint of immediacy to open we opted that the larger pieces of equipment: boilers, chillers, air handlers, etc… stayed in place. The ability to move their distribution trunks would delay our opening. However, the electrical distribution system could be routed and fed from other locations without significant time-to-install implications. All components of the system were lost: distribution gear, panel boards, feeders, and conduit. Since everything needed to be replaced, the decision was made to install it in new locations to protect the system from future loss.

Strategic positioning of the gear into locations affording minimal loss of “prime location” space allocation were chosen as well as the development of layering strategic planning to the distribution of the system to allow segmentation and isolation of parts of the building should a disruption occur, or even future constructability considerations, were made. This decision provided the organization a level of comfortable consideration that as systems were reinstalled, they were thoughtfully done in order to better serve and protect the organization in the future.

Planning to fail is never the first objective taken into consideration as a construction project is undertaken. But the need to know, recognize, and, ultimately, record this work into solid as-builts to be referenced and used for future resourcing should never be taken lightly. Not knowing the details of your facility when it’s in need of recovery from failure, such as a disaster, can open you up to failure when you are counted on the most.

The article on Lenart’s FEY Award can be found here.

Nominations are open for next year’s Facility Executive of the Year award. For more details and to view the nomination form, please visit this link.