With too many animals, not enough space and minimal funding, the Harford County Humane Society in Maryland needed significant facility changes to help improve operations. Built in 1947, the existing facility had many shortcomings, lacking the ability to handle the daily and demanding needs required to provide care to sheltered animals.

The Humane Society needed a creative, cost-effective solution to improve energy efficiency while also meeting very specific operational needs, so they hired Baltimore-based engineering firm, RMF Engineering and an architect/planner. The new facility had to be in compliance with the latest standards for animal shelters and allow staff to perform their daily functions more efficiently. It also needed to be as attractive, comfortable, and inviting as possible to help increase adoption rates.

Ground broke on the project in August 2014, and project completion is anticipated for September 2015. The construction bid came in just under the estimated construction cost of $6 million. Many crucial elements needed to be addressed, all within a minimal construction budget:

– Lack of sufficient space; rooms that should have been used for specific tasks were being used ineffectively as multi-functional areas.
– The existing, dated heating and ventilation equipment was in desperate need of replacement.
– Minimizing infectious disease and cross-contamination
– The daily water requirement; hundreds of gallons of water were needed each day to clean animal holding areas and wash loads of blankets used by the animals on the cold concrete floors.

The architect designed an efficient, multi-level floor plan that will open up floor space for the animals and the employees. For example, in the existing facility, some of the HVAC equipment is located on the floor, taking up space that could be used for animal support functions. The architect created a roof truss system, and all heat pumps are being raised to a platform area on the truss, freeing up floor space for more efficient use.

Knowing that initial costs and energy costs were a concern for the shelter, RMF chose an HVAC system that provided a tempered environment year-round and also eliminated odors and airborne diseases. A life cycle cost analysis was performed to compare various HVAC systems, including one that used a central boiler and chiller, a geothermal system, and split system heat pumps. Based on the findings, the use of split system heat pumps was selected because it offered the shortest payback and a level of redundancy, at a nominal cost, and it’s a simpler system that the staff could maintain internally, lessening the need for additional labor and expenses from contractors. (The sketch below shows a section of new air handling units located in the facility’s attic space.)

In order to recover as much energy as possible, the teams considered placing energy recovering ventilators (ERV) on 100% of the outdoor air units serving the kennels. However, with animals being brought in from unknown locations, eliminating cross contamination between the sick and healthy animals was critical. It was decided that ERV be placed only in the healthy animals’ kennels, not in the animal treatment suite or in the kennels housing sick animals, preventing spreading of airborne illnesses.

An enormous amount of water was being used on a daily basis to clean the blankets used to keep the animals warm. To eliminate excess water usage and staff time spent doing laundry, RMF has installed underfloor heating at the front of each kennel, creating a warm area for dogs to rest and a closer observation area for prospective adopters.

The dominant lighting source used in the new facility will be fixtures with fluorescent lamps and it was decided to use 28W T8 lamps. LED fixtures were used in the higher clerestory ceiling by the main entrance but their higher initial cost prohibited any further consideration throughout the facility.

The development of the Humane Society of Harford County’s new home, is an example of a major project that was approached creatively in order to stay within a minimal budget while making significant improvements to overall efficiency. 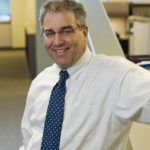 Devon has over 30 years of experience in program planning, feasibility studies, and project management of multi-discipline projects and associated staff. He is principal at RMF Engineering in Baltimore, MD and led The Humane Society project on behalf of the firm.