By Mark Lennon
From the May/June 2015 issue

There are many reasons an organization might have surplus furniture: a college replacing dorm furniture, a company vacating leased space, a headquarters being renovated, or a warehouse that’s overflowing. Ideally, some furniture can be repurposed internally. Some (but only the best) can be sold to liquidators. Some can be given to local charities like a Habitat for Humanity ReStore. But much of the time these options are inadequate; there’s no internal demand, liquidators aren’t interested, or the project overwhelms local outlets.

Since 2002, IRN-The Recycling Network has helped organizations find a combination of reuse, resale, and recycling that optimizes financial, social, and environmental outcomes. Reuse is almost always the key. While local charities can absorb only small quantities, there’s tremendous need for usable furnishings among national and international relief and development organizations. Networking and matching supply and demand is the key to almost every IRN project.

Based in Massachusetts, a firm relinquished the lease on its five story, 90,000 square foot suburban headquarters. There were a variety of furnishings: systems furniture; private offices; executive suites; training/conference rooms; kitchen/cafeteria; file and IT rooms; and reception. With a commitment to sustainability, the company established hierarchy for the furnishings: 1) redeployment internally, 2) liquidation for dollar value, 3) reuse by charities, 4) recycling for commodity value, and 5) disposal. By the time employees, company records, and technology were moved out, there was one week to empty the building, with two small elevators and a single loading dock.

The project began with dismantling and removal of about 140 Steelcase workstations, along with seating and other items, that were designated to be redeployed at another company location. Next, remaining systems furniture was knocked down and staged for removal. As the crew was released from knock-down, IRN coordinated arrival of five tractor trailers for furnishings designated for reuse by CAP, five rolloff containers for metal to be recycled, plus three rolloff containers for nonmetal items (mostly worksurfaces) to be recycled as mixed debris. Another truckload of reusable items was set aside for two local nonprofits—Easter Seals and the Alliance for Visual Arts.

Liquidation. This project demonstrated the challenges of liquidating surplus furniture. IRN and an owner’s representative spent more than 15 hours touring the premises with buyers. Few were interested, and the single bid eventually received, for a small subset of the furniture, was less than one-half percent of the purchase price. Against this paltry return, the owner opted for charitable reuse.

Inventory Management. Several times, the owner revised the inventory of furnishings to be retained for internal redeployment. This forced changes in the number and scheduling of trailers for reuse and rolloff containers for recycling. Ultimately, IRN’s experience and the cooperation of nonprofit recipients, contracted haulers, and IRN’s local recycling partner kept the project on budget and schedule.

At project’s end, about 30% of the furnishings, including nearly half of the systems furniture and much of the seating, was repurposed at other company facilities. Another 35% of the furnishings were provided to charity, including all remaining seating, conference and training rooms, private offices, file cabinets and work surfaces, and cafeteria and kitchen furnishings, along with several tons of office supplies. About 20%, consisting mainly of systems furniture, was recycled for scrap metal. The remaining 15%, primarily work surfaces, was recycled as mixed construction waste, with a recovery rate of about 85%. Not a single item was thrown away.

In this case, internal redeployment saved the company tens or hundreds of thousands of dollars in new purchases, plus thousands in disposal costs. Separating items with scrap metal value also saved disposal costs, and yielded several thousand dollars in revenue. Reuse through charity captured most inventory that could not be recycled for scrap, at a cost about $4,000 less than that of throwing items away.

Lennon is principal at IRN-The Recycling Network, a Concord, NH based manager of reuse for surplus furnishings and equipment from various facility types. 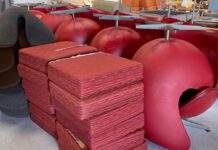 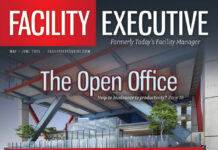