About an hour’s drive northwest of Columbus, OH, Honda Transmission Manufacturing of America operates a more than 600,000 square foot plant in the town of Russells Point. With a workforce of approximately 1,000 people, this facility makes automatic transmissions, gears, and four-wheel drive components. And there is something distinct about this manufacturing center: a portion of its electricity comes from the winds that blow overhead. First set in motion in January 2014, two 1.7 megawatt GE wind turbines—standing 260′ tall with 160′ blades—are situated on-site on some of the highest altitude ground in Ohio.

The turbines have positioned Honda as a pioneer in the “greening” of the American auto manufacturing sector, making the company the first automaker to supply a meaningful portion of its energy use from on-site wind turbines. And the turbines are getting the job done. The project had originally been anticipated to provide 10,000 megawatt hours (MWH) to the facility, or about 10% of its electricity demand. In practice, the turbines performed better than expected, delivering nearly 13% of the plant’s energy during 2014. Output exceeded 15% during six of the year’s 12 months.

The wind initiative is part of a broad commitment on the part of Honda to promote sustainability. The company is aiming to achieve a 30% reduction in carbon dioxide emissions from its overall line of American automobile products by 2020, compared to 2000 levels.

While the turbines are on Honda property, the wind project itself is owned by an energy services company, ConEdison Solutions (CES) of Valhalla, NY. The project was originally developed by Juhl Energy, a clean energy provider based in Pipestone, MN. And CES stepped into the picture prior to construction when the project was ready to be put out to a long-term investor.

CES financed ownership of the turbines within the context of a purchase power agreement (PPA) with Honda. As defined by authors Albert Thumann and Eric Woodroof in Energy Project Financing: Resources and Strategies for Success, a PPA is “a long-term agreement to buy power from a company that produces electricity.”

The PPA provider’s role is to assemble financing to build the project, and to “own, operate, maintain, and manage the system for optimal performance.” Providers such as CES also aim to maximize various public incentives to help keep PPA rates low. The host customer—in this case Honda—“runs [its] business as usual,” without concern for operating the renewable system. In essence, Honda’s core role is to buy the electricity produced by the turbines. This outsourced approach frees end-users to dedicate their capital more fully into core operations. Meanwhile, the PPA provider gets operational assistance from select subcontractors. In this case, Juhl assisted CES in construction and start-up.

For a venue to accommodate projects of this scope, the preferred space needed is 1,000 yards, though sites as small as 500 yards can also prove feasible. Sites must be clear of roads and such obstructions as buildings, trees, and houses. It is also instrumental, of course, to have good wind.

Unless an end-user is so committed to sustainability that it is willing to pay extra for renewables, the most powerful economic driver that makes wind or solar power feasible is the local cost of electricity in the utility territory where a renewable asset is situated. No matter how powerful the wind or sun may be, it is difficult for a project to return adequate revenue in areas where electricity costs are very low. The economic appeal can be substantially affected by state and federal incentives. To pinpoint incentives by state, interested parties can visit DSIRE (www.dsireusa.org), described as “the most comprehensive source of information on incentives and policies that support renewables and energy efficiency in the United States.”

And wind power is on the rise. In 2012, according to the American Wind Energy Association, the United States installed more wind capacity than any other country. The energy source represented 42% of all new capacity that year.

“We are extremely pleased at how the wind turbines have performed at Russells Point,” says Gary Hand, vice president of Honda Transmission Manufacturing of America. “When it comes to environmental stewardship, we want our efforts to inspire other manufacturers to follow our lead and also pursue green initiatives. Without question, the turbines have added value to our operations.” 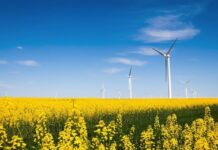 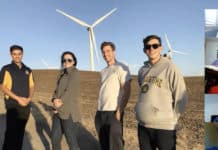 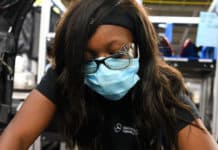