By Darren Hammell
From the September/October 2015 Issue

The energy storage market began to take off when electrical blackouts and brownouts swept the globe, either due to natural disasters or simply because of an unreliable electric grid. The world discovered that storing energy for later use allows for the balance of supply and demand, and for maintenance of electricity during a power outage. Today, advances in this technology from energy companies are increasingly efficient and cost-effective. When integrated with solar power, energy storage makes the energy of the sun available 24/7.

Energy storage, or batteries, has been in use for a long time; the first cars ever made ran on batteries. Modern batteries, however, can be charged and discharged hundreds of times without losing their ability to hold power, and they are much smaller, cheaper, and more efficient. Each of these features is critical for batteries to support applications like storing large amounts of solar energy or backing up an entire building, which is why it is only recently that the modern energy storage industry began to develop.

In a microgrid application, more than one generation source supplies energy to a local grid, where one of the sources is often the electric grid itself and another is often a solar array or a diesel generator. In these scenarios, a battery energy storage system is often used to balance power from multiple sources and allow more sophisticated controls, reliability, and efficiency.

In 2012, a commercial scale microgrid system was put into operation on Alcatraz Island, in the San Francisco Bay Area. Prior to the commissioning of the project, the island’s generators ran on diesel fuel, which created pollution and high carbon emissions. In 2010, Princeton Power Systems was approached by the National Park Service (NPS) to supplement these generators with a battery energy storage system and a solar array to reduce diesel usage as much as possible given the physical and budgetary constraints on the island.

The technology involved in the Alcatraz Island Project included a 305 kilowatt (kW) solar, 959 panel photovoltaic array that was placed on the roof of the prison in a flat configuration, rather than angled, to preserve the original island appearance and preclude them from being visible from San Francisco. Multiple grid tied inverter power control systems, microgrid controllers, battery racks, and generators were placed in an old generator room to prevent saltwater damage and out of view of the million visiting tourists each year. The solar array directly powers the island loads, through the grid tied power converter, and any excess generation is stored in the 2 MWh battery. The battery is discharged at night to continue to supporting the island, and when necessary a diesel generator is automatically started to provide additional energy.

The primary purpose of the microgrid is to provide 24/7 reliable energy, with secondary goals of reducing operating costs and emissions that are directly tied to diesel fuel use. The batteries and microgrid controller alone would reduce diesel fuel use by about 20-30%, and combined with the solar array the island is running generators up to 80% less. When the diesel generators do run, they run on ultra-low sulfur diesel fuel and are powerful enough to meet the island load and charge the batteries.

One important concern was the preservation of the natural environment and wildlife of the island (the word “Alcatraz” can be translated into “pelicans” in old Spanish). Construction logistics paid close attention to not disturbing bird habitats, especially during nesting season. Also, extra attention was given to the solar panels after the birds of the island were dropping rocks and shells from overhead.

The majority of the island’s power is now produced by solar. If solar and batteries are not available, the generator kicks in automatically and runs with maximum efficiency to recharge the batteries while simultaneously powering AC loads at the site. The system is managed using a frequency-shifting control strategy that requires zero communications among the microgrid inverters. The NPS has reported a net diesel fuel reduction approaching 80% compared to the original generator-only power system.

A microgrid project similar to Alcatraz was implemented at the Brooklyn Army Terminal in New York City. Commissioned in 2014, this flagship solar and energy storage project for Consolidated Edison (ConEd) and the city’s Economic Development Corporation is designed to help the city reach its PlaNYC and resiliency goals, including a 30% reduction in greenhouse gas emissions by 2030.

Similar to Alcatraz, the site features a 100 kW grid tied power control system and an energy management operating system controller. While the system operates similarly to Alcatraz, the primary difference is it is always tied directly into ConEd’s electrical distribution network rather than operating as a true island. This way, the building can use less expensive electricity delivered by ConEd to supplement the solar energy, and the battery system can directly provide a benefit to ConEd’s distribution grid by charging and discharging at specific times when the grid is most under or overloaded. This grid-supporting operation reduces facility electric bills and saves ConEd on the costs of upgrading infrastructure. 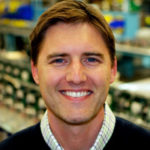 Hammell is CSO & co-founder of Princeton Power Systems, a designer and manufacturer of technology solutions for energy management, microgrid operations, and electric vehicle charging. He co-founded the company in 2001 after receiving top honors in a Princeton University business plan contest. Hammell graduated with honors from the university with a B.S.E. in Computer Science.

A March 2015 report from NPS on the Alcatraz system can be found here. To share your thoughts on this topic, visit the Comments section below.